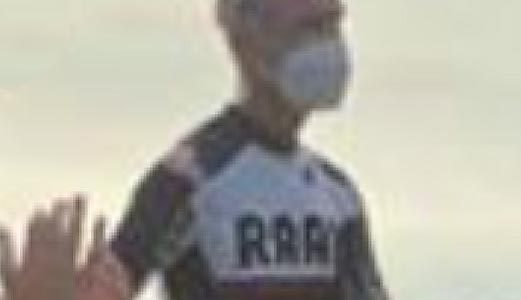 In the photo I am wearing a face mask holding my two trophies (Male Overall and Male 50-60 winner). I was one of only about half a dozen people out of roughly 50 who wore one before and after the race. While people were fairly well isolated during the race, the crowds were in close quarters before and after for an hour. Two women for the first time won both the 12 hour and 6 hour races. One of them, Claudia Langarica, is also with me on Jay Yost’s ‘No Walkin’ ‘Til the Van Passes’ ultra-relay team that races River to River every year – although not in 2020.

First, many thanks to Jay for deciding to hold the race. If any race can be held safely right now, it would be a self-supported ultracycling race like the ‘Fatass.’ The new venue just outside of Mahomet also helped, and was really easy to ride in and out of. The race was a great success, and every cyclist there needed a little bit of relief from the pandemic routine to get out there and ride long. People were even more excited than usual, and for good reason! Thanks also to Luke Taggard (also a masked man) and many other volunteers who helped out.

Although DECAMAN USA, a 1400 mile race in Louisiana I’m signed up for in November was just canceled, that Saturday I was treating Fatass as a great ultracycling training opportunity. I had no machinations at winning because my training has focused on run fitness since March (Spartahlon in September, not canceled yet), and while running provides excellent base fitness for cycling also, the non-cycling legs do feel tired before the aerobic system does! So in this race I felt aerobically fresh after 12 hours, but my legs felt tired at the end, an unusual combination for me. There were also plenty of top ultracyclists there to take the title, including top women racers.

I arrived around 5:30 AM with the plan of setting up my coolers, waiting for 2 minutes until everyone had left in the pack, and then heading out for 12 hours solo on the aerobars of the ‘Superbike.’ And that’s exactly how it transpired. My coworker and friend Lloyd Munjanja, who had recently gotten into cycling due to some running injuries, brought his new road bike with SRAM Red components (bought from Jay) to the race.

As I had explained to Lloyd, winning ultracycling races is about staying on the bike as much as possible, not stopping for aid any longer than necessary, and keeping riding, eating and drinking no matter how hot it gets or how terrible one feels at the moment. It’s just a moment. Lloyd clearly got it because he ended up winning the Male 18-49 age group.

I rode my usual very even pace all day, averaging around 18.5 mph in the loops pretty much from beginning to end. Around 11:30 I was lapped by a group of four fast riders who had put 25 miles in me in under 6 hours! I was not too worried: by then the heat index was rapidly climbing to 105 °F, and the humid wind often felt like it was heating my body, not cooling it by assisting evaporation. Any one overdoing it even slightly would collapse in the mid-afternoon. My loops were interrupted for less than 2 minutes by stops to throw out my empty bottle and pick up a fresh deep-frozen one plus two 100 calorie nutrition packs (gel or babyfood pouches) and 1-2 salt tablets, totaling 600 mg sodium and 250 calories an hour. Most importantly: a swig of non-alcoholic beer to add 70 calories of malt in a refreshing carbonated, non-sweet and ice-cold drink. A racing crew nearby got to know my beer routine and it became a little standing joke.

I began to pass people who had ridden ahead of me like Kelley, and lapped others who were smartly conservative, like Lloyd, who was riding about 15.5 mph to my 18.5, following my ‘play it safe’ advice for his first race. I lapped most people while they were crashed in chairs at the start/finish, too exhausted to go on. Eventually I found the lead pack there, sweltering in the sun.

The make-or-break section of this race was a two mile stretch into the 15 mph SW wind that was blowing through the micro-town of Osman. The stretch had been freshly graveled to make the ride on road tires wobbly, and the wind picked up in the afternoon. It’s one of those things where on loop 1 people pay scant attention, on loop 4 they are annoyed, and if they make it to loop 7 they dread it. I passed a lot of people there who were rolling slowly, crushed by the heat, humidity and gravel.

By loop 7, Jay and Luke doing loops in the support van found me while taking care of roadside necessities and told me that I was in second place overall, with a lady from Ohio about half a loop ahead. I was surprised to hear this because I figured more people who had been ahead of me were still on the course. With only 1.5 loops to go, there was no chance of catching up half a loop (35 minutes to make up at full blast with less than two hours to go), so I just battened the hatches, had my last beer, and finished loop 8 without incident before putting in an extra 8.8 miles to get to 206.4.

The lowest mileage I ever did in a 12 hour, but enough for the Men’s overall and age group wins, and second overall. Lloyd won his age group with 175 miles. Everyone who started out fast was toast by 150 miles once the relentless mid-day heat kicked in. 2020 ties for the top two hottest and most humid Fatass that I’ve raced, so it was a real character builder for everyone! I hope it rubs off at Spartahlon – if it doesn’t get canceled or I am unable to travel.