Martin’s report: Rikki, Ryan and I are qualified for an early Paris-Brest-Paris sign-up next year. This convinced Jay that he also needed to do a brevet to get his foot in the door early. We did the 300k and finished first by hours. Photo: at the Mississippi in Bellevue. 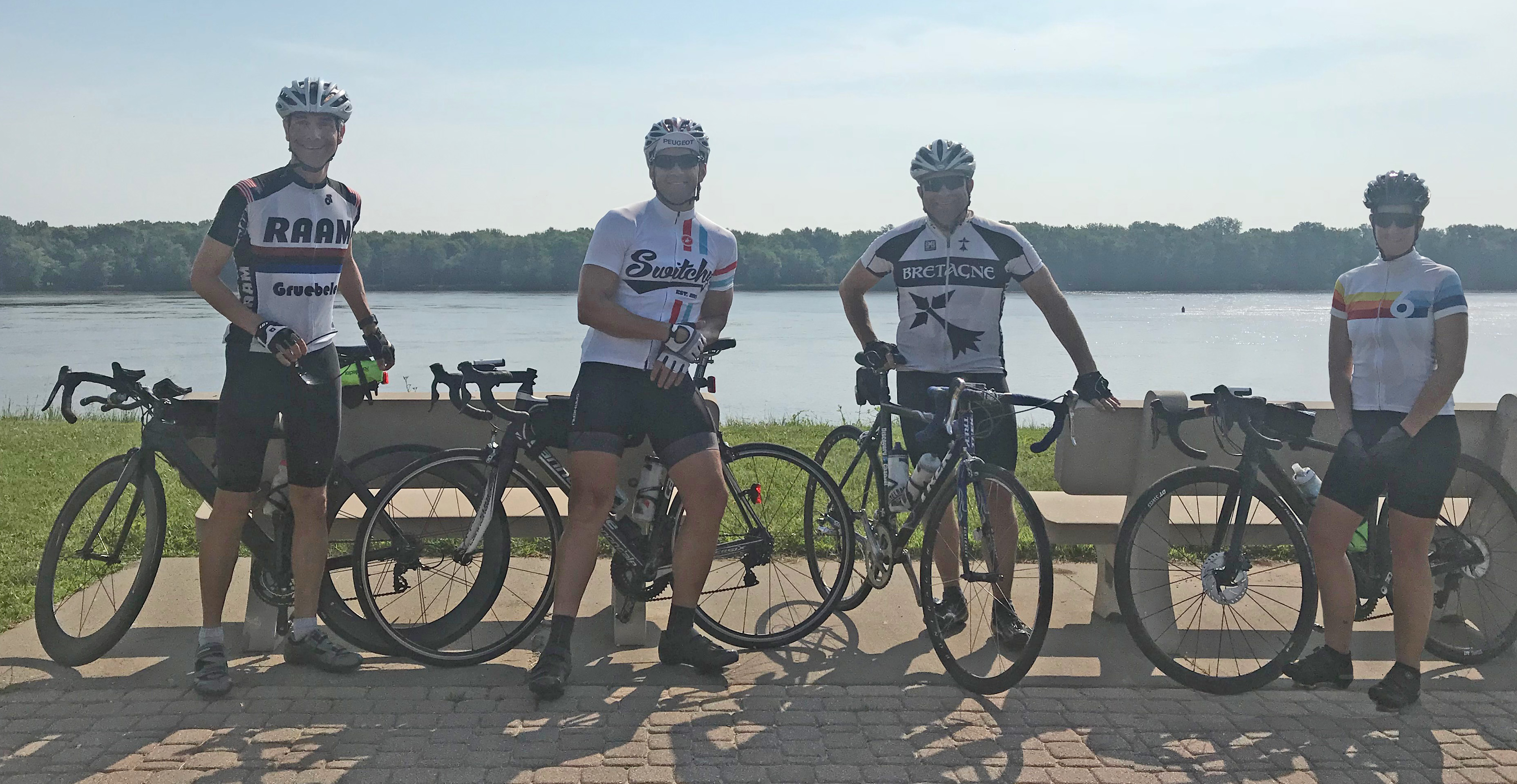 The long: We again drove up Friday before the timed ride and stayed at the Quality Inn in Eldridge, the race hotel. We enjoyed the sausage platter and pretzels at Bierhaus in Le Claire first, though. Everyone was off to sleep by 10, with a wakeup at 5:15 giving ample time to rest. After a quick granola breakfast, I took my bike down and signed up, as did Jay. He had forgotten his ankle bands, light and vest, all required for 300k+ brevets. Not that we would ever take past sunset to ride 189 miles!

Off to a punctual start after organizer Mike Fox took a group photo, we zipped through Low Moor and into Bellevue in no time. We had a 200k rider in the group, as well as a lady and gentleman doing the 300k. They all bade us goodbye in Bellevue when we left. We took a photo in front of the Mississippi River, which comes into a view about 55 miles into the ride. Out of Bellevue, things started to get serious with climbing and temperatures into the 90s. By the time we reached Peosta, the northern control of the 300k route, it was about 95 °F and that would not let off until late in the day. It was a tough day, and I had to carefully dose salt tablets, small portions of gel or bars, sportsdrink, and some real food (chicken wraps and the like) to keep my stomach just so. It worked, and I felt strong the whole day, with no need to get off the bike even at the hottest times.

We continued south into Cascade, with no other group visible behind us on the out-and-back from Peosta. From there, we carefully worked over the risers. Rikki was overheating and needed to slow down a bit. Ryan got a muscle spasm issue in his back, possibly from not enough electrolyte. And Jay and I plodded on at the front, although Jay finally had to stop and cool off a couple of times before catching up. The ride back to Eldridge was against an incessant headwind, and I would sometimes slow behind the group, and then zip past near my aerobic threshold pace, so I would get more wind cooling me off. We made a pit stop in High Mound, where a small gas station had life-saving bags of ice and, dare I say it, wheat beer!

Back on the road, we plodded the last 18 miles to Eldridge at a fairly slow but even pace, after passing a 200k rider who was pushing his cutoff time. We got ‘home’ in 13:05 hours, about three hours slower than my solo 9:58 a couple of years earlier on the same course. Well, I was training for RAAM that year and in serious cycling shape. Back to Rikki’s truck, some of us loaded bikes while the others showered, and then we headed out to the Bierstube for some Schnitzel with lemon, liter mugs of beer for Ryan and Jay, and some cooling-off after this really hot ride. It was a hard ride with the full humidity, heat and sun exposure that Kansas can offer in June!