Question: When is a bachelor party a bike ride? Answer: When Wild Card Ryan Linne is getting married to Kayla Kinsey! 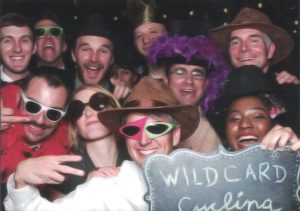 Fun was had by many Wild Cards and their spouses at Cedar Lake Cellars near St. Louis, when Kayla and Ryan tied the knot on October 28th, 2017. The Wild Card contingent including Ryan did a 56 mile bike ride through the hills around Wentzville in the morning, instead of the usual bachelor’s party. Some of us also enjoyed Daniel Boone’s home, a blacksmith in live action forging stuff, meats and beer at the Bavarian Smoke Haus, and the Horseshoe Pitcher’s Hall of Fame, an ode to an obscure but high-skill sport – kinda like the ultracycling of throwing sports.
At the wedding, Martin, Jay, Aaron & Melinda, Aaron Garske, Kyle, Scott and Neil had a great time, together with spouses and friends. Jay & Martin gave Ryan and Kayla as a wedding present … a track bike! What else do you expect from us?