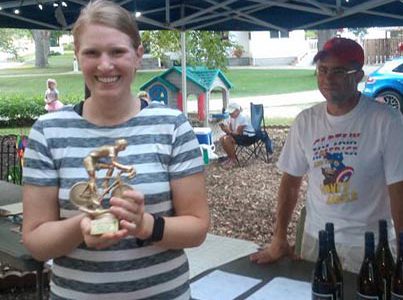 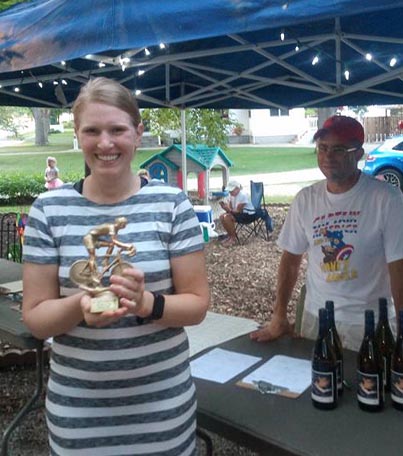 The 6 hour race was upgraded by UMCA to a World Championship event for 2017. A good crowd (over 20 riders) showed up. Very quickly, a lead group of 6 upright and 1 recumbent racer formed: Tom McKenna (just off a RAAM 5th place overall in June), and Thomas, Rob, Aaron, Neil and I from the Wild Cards. After two loops at 23+ mph, Rob took a little longer than the rest of us to re-stock and we thought he wanted a break, so we were down to 5 racers. The recumbent pulled away in loop 3, and we let him go as there is little draft and he was going to be blazing fast on this flat course. Loops 3 and 4 continued at 22+ mph on-bike speed. Finally in loop 4, Aaron had to beg off as it was getting hot (topped out at 81 °F). We met up with Melinda at an involuntary train crossing stop, she was in the lead in the women’s category. In loop 5, a small mishap befell me: I dropped my water bottle and had to rev up my heart rate from 130 (good) to 180 (bad) to catch the group over the next 2 miles. My stomach shut down immediately, and 20 minutes later I had to throw up. In the meantime, Tom pulled Thomas and Neil into loop 6, and Neil won the sprint back to town (no surprise there). I finished 3.5 miles behind them with 130 miles (still an average of 21.7 mph). We all got plenty of award wine bottles from Jay (I took M50+ 1st, Neil and Tom M25-49 1st and 2nd), but the golden cyclist statue for the World Championship went to the recumbent – and to Melinda in the women’s category!
It was a privilege to ride with this lead group. Everyone took regular turns, the speed was high, but even and sustainable, and people generally slowed for pee breaks and bottle exchanges (and for my bottle fall). A near-optimal race effort.
There was beer from J. T. Walker’s and excellent grilled pork and meaty beans for the party afterwards, RAAM finisher conversation for me and Tom, and all had a good time. Collin Johnson, freshly married, had come down from Michigan to race in the 12 hour. Valerie Litznerski broke her own 12 hour course record, and a new men’s course record at ca. 273 miles was set. It was a great day for an utracycling race!