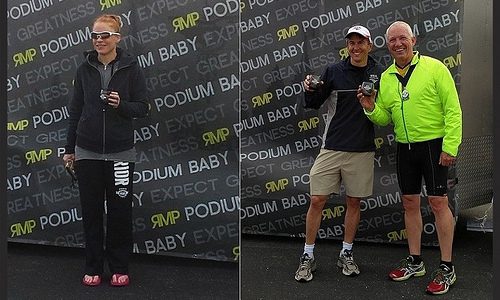 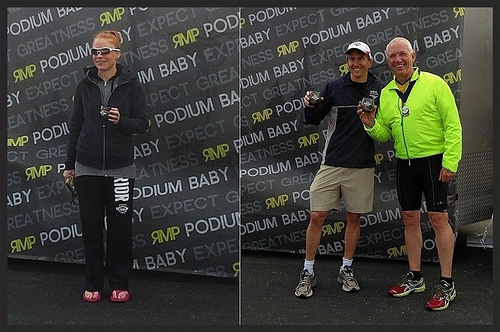 Suzanne and Scott went to St. Louis for the October 4 Border Wars 70.3 triathlon showdown in the Alton area. This is the second running of this race, so-called because it starts in Missouri and ends in Illinois and because they have an "East vs. West" traveling team trophy. Racers and volunteers earn points for their team, determined by which side of the Mississippi River they reside. The trophy resided with Team West, which last year was stacked with several St. Louis tri clubs.

When Scott registered, he noticed there was an Elite wave that paid cash prizes to the top 3 male and female finishers. Scott had no business with it, as he is about 45 minutes too slow to hang with the elites. (Another minor detail: He skipped the 13.1 mile run as he hadn't worked back up to that distance since taking a running hiatus.) So he asked Suzanne if she had registered Elite. No? WTF?!? She was 4th overall last year and has made a quantum jump this year, with the help of focused training and a coach. She even kicked Scott's booty in a training ride the week prior (and Scott thinks he's pretty hot s#@t in time trial mode.) Her response: "I don't know, there's some pretty fast chicks out there." Whatevah!

The two arrived Saturday for bike setup at the Alton Slough, a Mississippi river backwater on the West Alton side in Missouri. Suzanne noticed that the T1 area was much smaller than last year's, which spilled out of the parking lot into the street. (The new date for Ironman Louisville hurt attendance this year.) They met Elite male Chris Sweet from Lexington, Illinois, whom Suzanne recognized from prior races. He also asked if she was racing elite. "Alright already!" Suzanne agreed to inquire. Co-race director Jamie O'Connor was helping with packets and made a call to co-director and husband Lee. "Sure, you can switch. Here's a white swim cap." There were only eight people in the elite field, and one other woman.

Sunday morning brought cool temps, overcast skies, and a stiff wind. The water was choppy and a brisk 64 degrees. (It was in the 50s last year, when an upstream lock was opened the day prior to the race to alleviate low water levels.) Suzanne's elite wave went off first, with Scott joining the 40+ male commoners about 3 minutes later. She's a very capable swimmer, but this was a select group and it would be a challenge to hang with the mostly male field. She still came out of the water 6th, ahead of her female competition and one dude. Scott was in the "washing machine" almost from start to finish, easily passing the slower swimmers in the prior wave and getting passed by one or two fast chicks from the wave behind. After the last turn, he applied Martin's drafting technique of grabbing on to a woman who swam just slightly faster. It worked with some success for about 200m, but then the pack came upon a kayaker who told everyone to shift right. Sighting was a challenge with the chop and overcast skies. The wind also limited how many buoys were placed. (One blew away the night before and shortened the course a bit.) Scott's pink-capped guide adjusted better than he did and he was left to finish with a fellow slow dude.

Into the first transition, Suzanne and Scott both experienced numb feet and were challenged just pulling socks on. The bike course took riders through the bottom lands between the Mississippi and Missouri Rivers. It was flat farm country and the stiff wind made it feel just like home. There was very little climbing except for the Clark Bridge, that took riders into Illinois at the very end. Unfortunately, the sun never broke through and it was rather miserable. Suzanne had an excellent ride, with an almost perfectly level power profile that put even more distance between her and her challenger. Scott had a slow start, felt great in the middle, and then collapsed over the last 10 miles.

Suzanne started the run with about a 16 minute lead. It was an out-and-back on a multi-use trail on a levee along the Illinois side and was flat except for a few annoying dips in the embankment. The weather that had tormented for the first two legs had now become an asset. The run is not Suzanne's strength, but it has been getting better. Putting big time into your competition on your strength and limiting losses on your weakness is often a winning formula in triathlon. Suzanne worked it to perfection, giving up about 5 minutes on the run to win by nearly 12. Her finishing time of 4:49:04 put her in rare company, and scary close to Martin-territory! 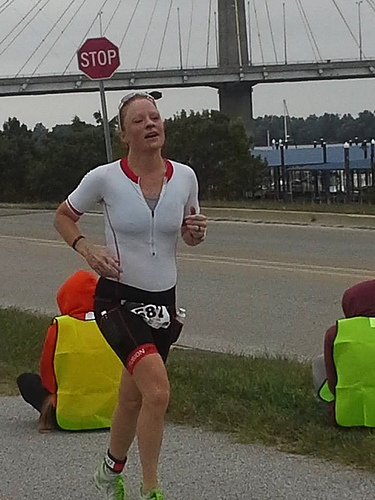 The pain of the run, mixed with a shot of pink eye, invokes the look of death.

The reward was a $400 payday, but the racers would have to wait more than two hours after finishing and loading the car before Lee would cut a check. It seemed kind of ridiculous, as the other elite podium finishers came from places like Fort Worth and Nashville. Champaign was relatively close, so Suzanne and Scott just rolled with it. Knowing that Suzanne would buy lunch with her new found wealth, but not wanting to be a total jerk, Scott suggested Fast Eddie's Bon Air up the road, where the beer is cold and the burgers are 2 bucks.

Scott also won his Aquabike division by exploiting a small field of guys with running injuries who go through Bengay faster than toothpaste. Both results helped Team East capture the cup from Team West. This was Suzanne's final test before the penultimate Ironman Arizona, where a Kona qualification is a distinct possibility. Scott is just hoping to parlay his skills in luggage and equipment loading into a gig as a team bus driver when her big sponsor dollars start rolling in.