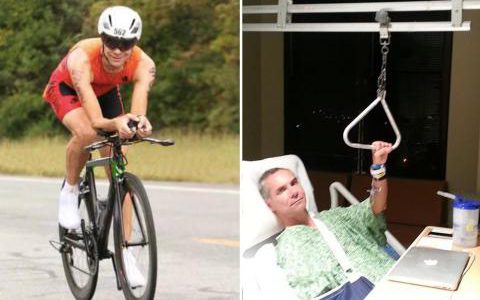 The short: Crash! (Photo: A confident smile on the bike at mile 70 was replaced 5 minutes later with multiple fractures and a collapsed lung, necessitating hospitalization.) 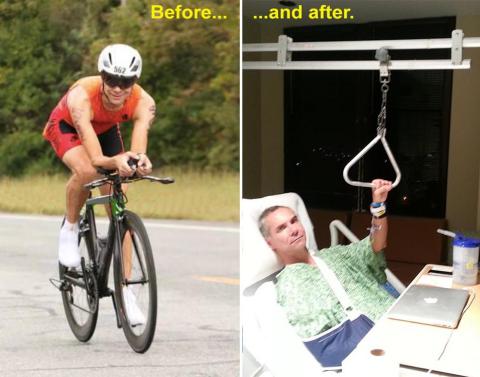 The long: I felt strong going into this race with all the PBP bike training under my belt, although a lingering foot injury from the Stovepipe Tri had me worried about the run. Little did I know that I worried about the wrong thing!

Chattanooga is a very nice town nestled between the Tennessee River and Lookout Mountain. It features the world’s steepest cable car up the side of the mountain, with a historic Civil War battlefield park at the top. Bruce Hajek from U of I was also racing.

After checking in my bike and transition bags, I got up at 4:50 on race morning, filled the drink on my bike in transition, got body-marked, and took the shuttle bus to the swim start 2.4 miles up-river. The water was too warm for wetsuits. This was a time trial start, and I hopped in the water around 7:45 AM. After 5 minutes, I was passed by a lady swimming slightly faster than me, and drafted her. She turned out to be ultra-competent, steady, sighting the shortest legal line between buoys across the turns of the river. I stuck with her for a new Ironman swim PR of 1:05 (excluding previous wetsuit PRs).

I felt strong and fresh out of the water, and revved it up on the hilly bike course, passing hundreds of competitors, and rarely being passed myself. The “before” photo reflects my level of confidence at mile 70.

Then came mile 75: a steep descent that connects Cove Road to Hog Jowl Road. I had done it once already on the 2 loop course, it was nothing special. This time, as I pulled my brakes doing 30 mph, the rear wheel suddenly locked up. I remember my surprise as the bike flipped out from under me and I was flying through the air because I wasn’t even braking that hard. I crashed onto my right shoulder and side, got up, and walked to the side. As I wanted to get back on the bike, a volunteer said “You’re not goin’ anywhere,” pointing at my right shoulder. I looked over, and there was a sharp bump protruding under my skin. I’ve finished iron races with broken ribs, but a broken clavicle just doesn’t work. So I sat down and chatted with volunteers while we waited for the ambulance.

At Erlanger hospital, I learned the meaning of southern hospitality. I spent three days in some of the most competent and friendly care I’ve ever experienced, eating too much bacon and grits. My collapsed lung was re-inflated, painkillers and a sling took care of the 4 fractures of clavicle and ribs. My chest tube was pulled out 2 days after the race and I got the green light to go home. The clavicle was left-as-is with my arm in a sling, for a decision in Champaign whether to operate, or let the pieces find one another and heal by themselves. Six weeks of rehab ahead.

As Ron was saying while commiserating: at least now my foot injury will have plenty of time to heal! This was the last race of the season, so if it had to happen, it couldn’t have happened at a “better” time. To make up for it, Bruce Hajek finished top 10 in his age group, an excellent finish.