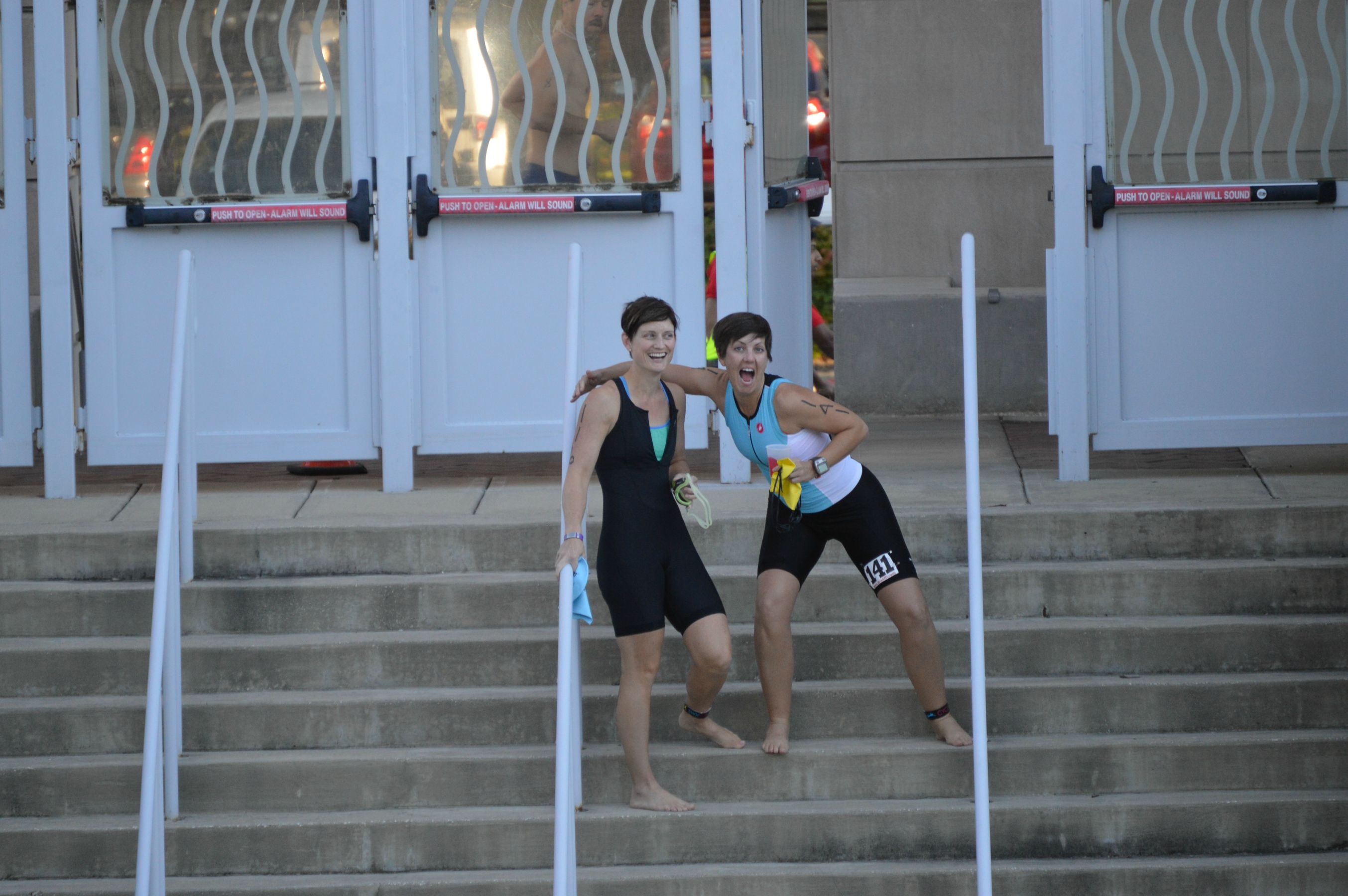 Meg and Rikki staying loose before the race

The racing season is winding down, save for CX and a few long-distance triathlons, and the crispness of fall is in the air. It must be time for Tri the Illini, a race noted for its proximity and accessibility to beginner and elite triathletes alike.

Meg and Rikki staying loose before the race

The racing season is winding down, save for CX and a few long-distance triathlons, and the crispness of fall is in the air. It must be time for Tri the Illini, a race noted for its proximity and accessibility to beginner and elite triathletes alike.

The course works in the favor of cyclists, with a short pool swim and flat 5k run book-ending perhaps the hilliest 14.5-mile bike course possible that starts and ends at the ARC on campus. It was thus no surprise that Wild Card racers were well represented on the first page of results and all earned age-group podiums. Friends and family of the team also did very well. Here's a quick run-down of each, including placements in parentheses (overall gender/overall gender minus collegiate/age-group).

Nick Modrzejewski (4/1/1) : A friend of the team and occasional Wednesday-night rider, Nick is all-in for Ironman racing this season. A heavy week of training, including a 6-hour+ bike-run brick the day before the race, seemed to do little to his impressive 1-hour speed.

Kate Denmead (11/5/2): The former D3 all-American swimmer put up the top female swim split among all age-groupers (and 3rd including the men!) If she can close the bike split on Tyler and he can close the swim split on her, they could become a hugely successful (if not accidental) tri couple. Here she explains to Tyler how to swim, moments before the start. (Moments later, Tyler would swim right past Scott.) 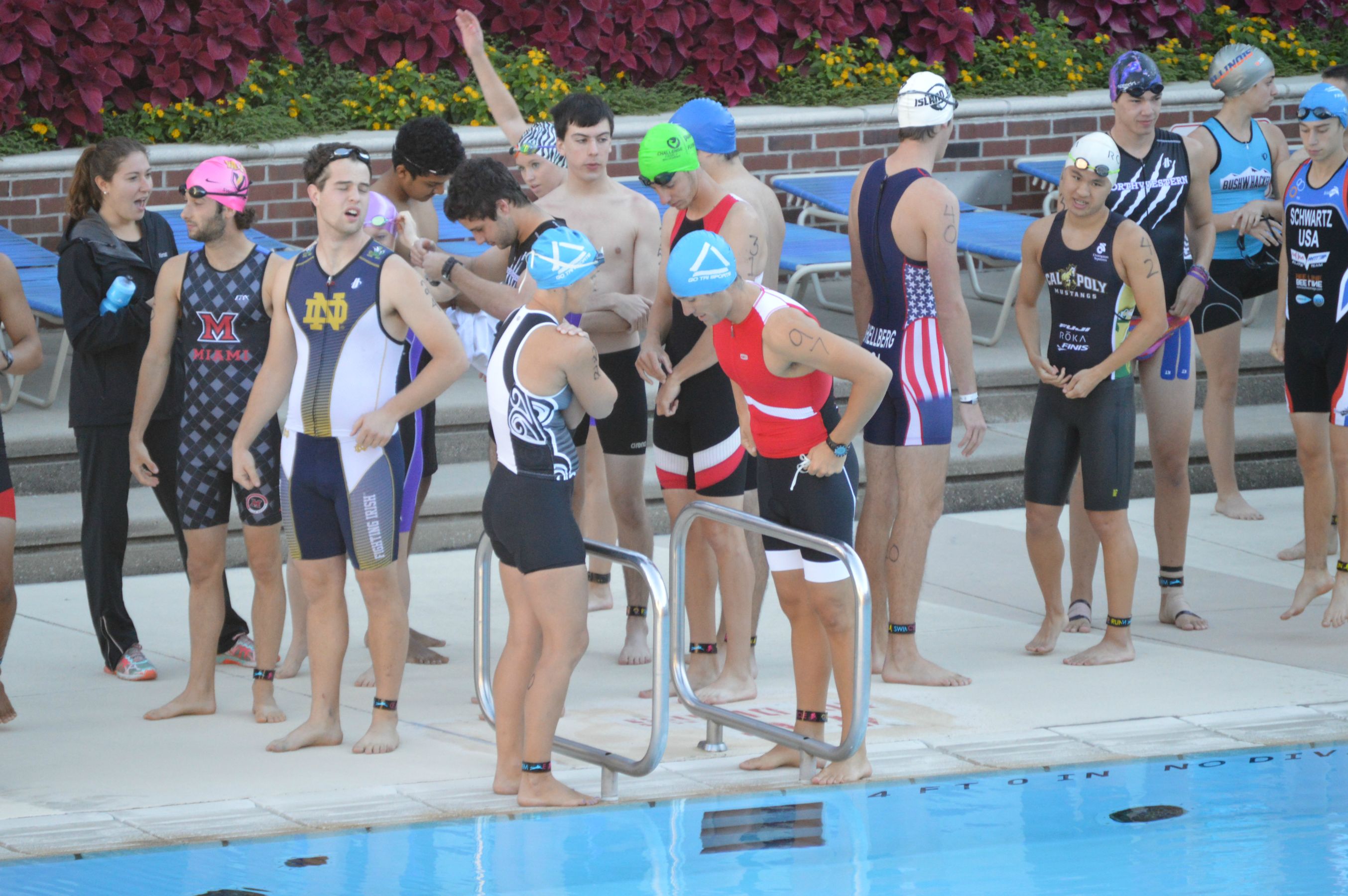 Rikki Linne (19/9/1): Wild Card photographer Ryan's sister recorded the top bike split in her age group by over 4 minutes to win it. 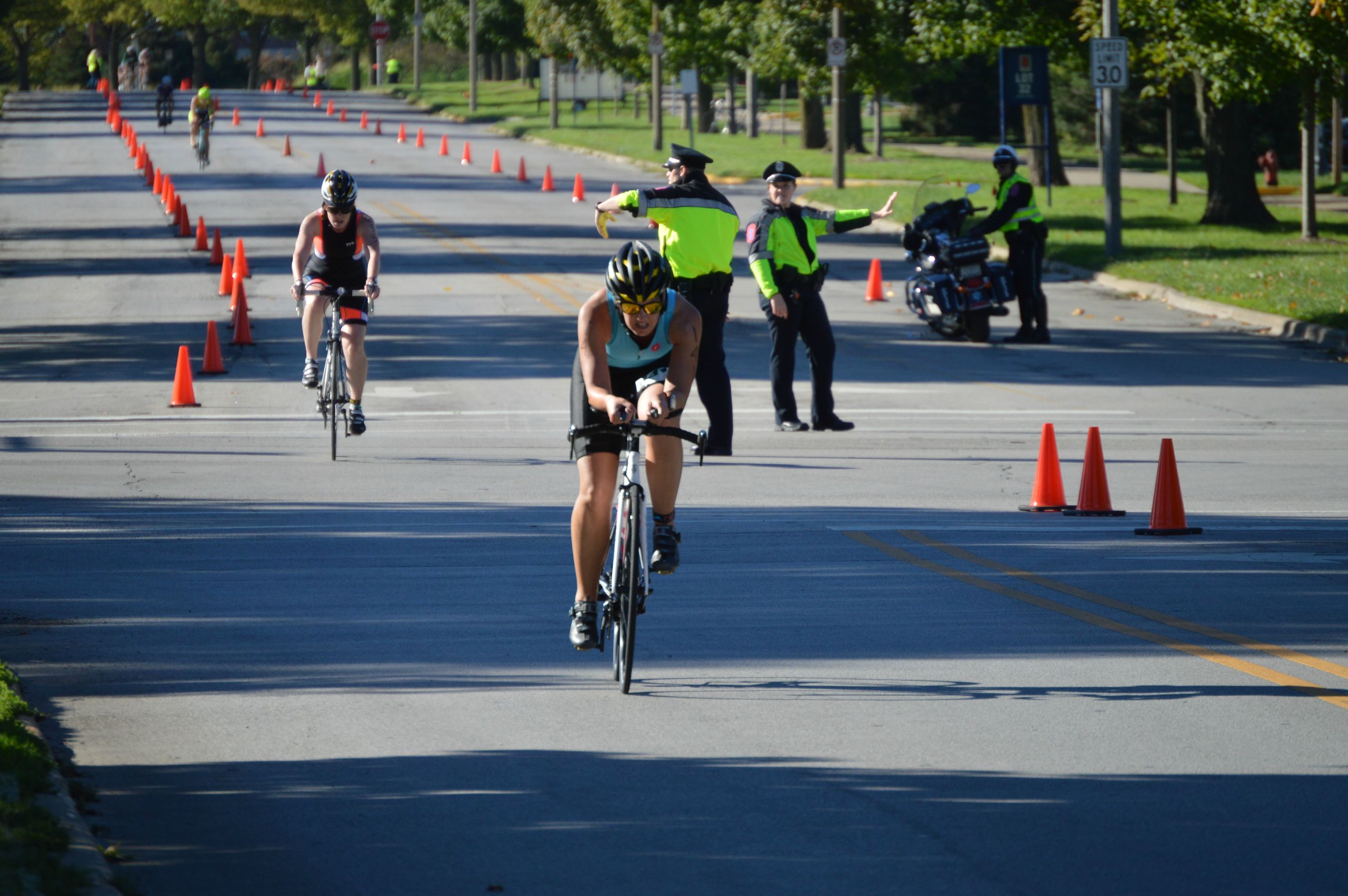 Scott Dahman (19/6/2): Ryan not only contributed his mad photog skills, but he graciously lent the Cervelo P2 that Scott used to post the top bike split in his age group. With limited run training, he came up short to a dude with an 18:25 5k run. He paused from un-shoeing to salute his bike sponsor. 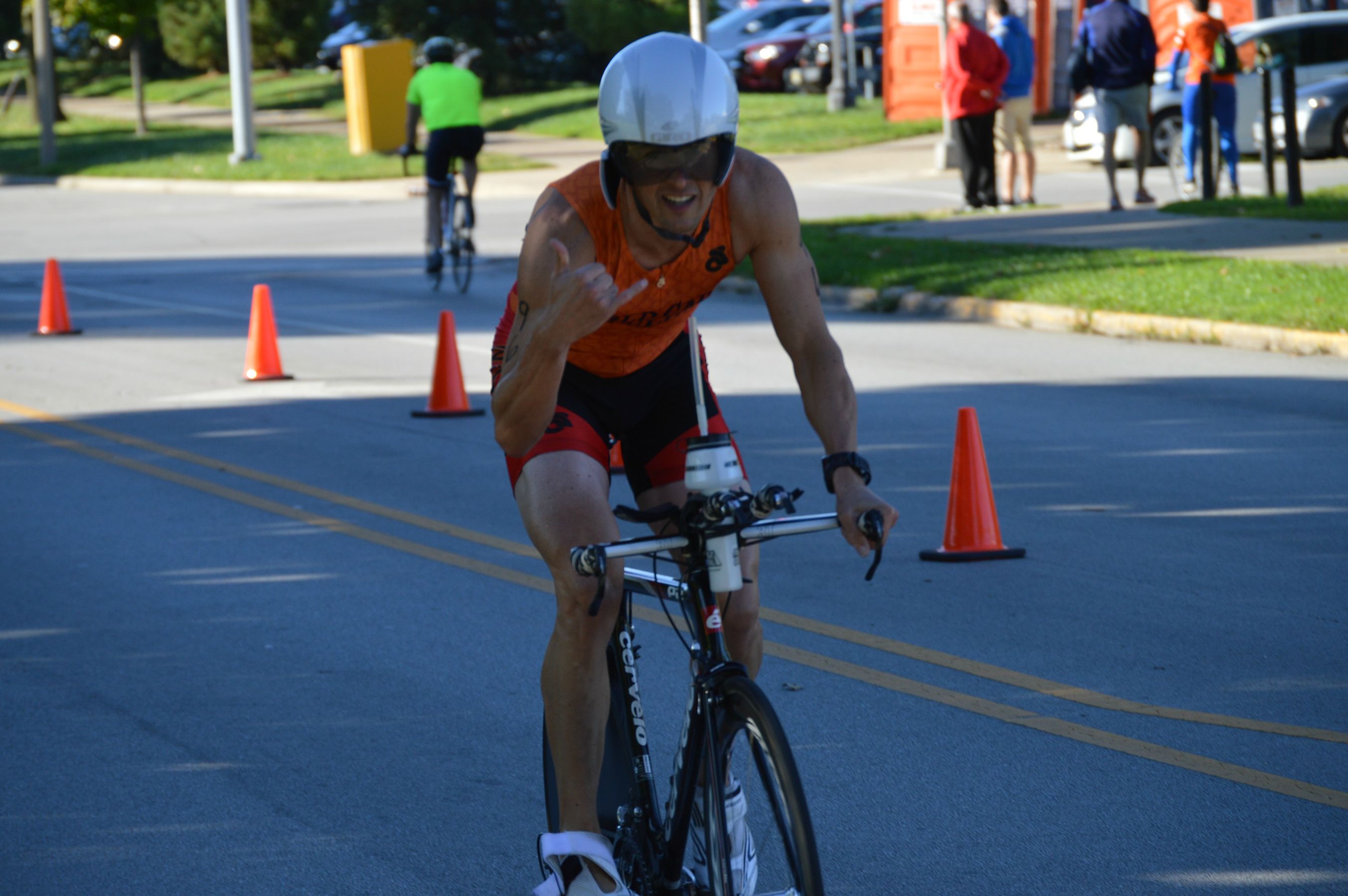 Tom Carlson (23/7/2): Tom shaved a ton of time off his swim this year and capped his race with a sub-20 minute 5k. He's also looking equally determined and aero on his TT bike. 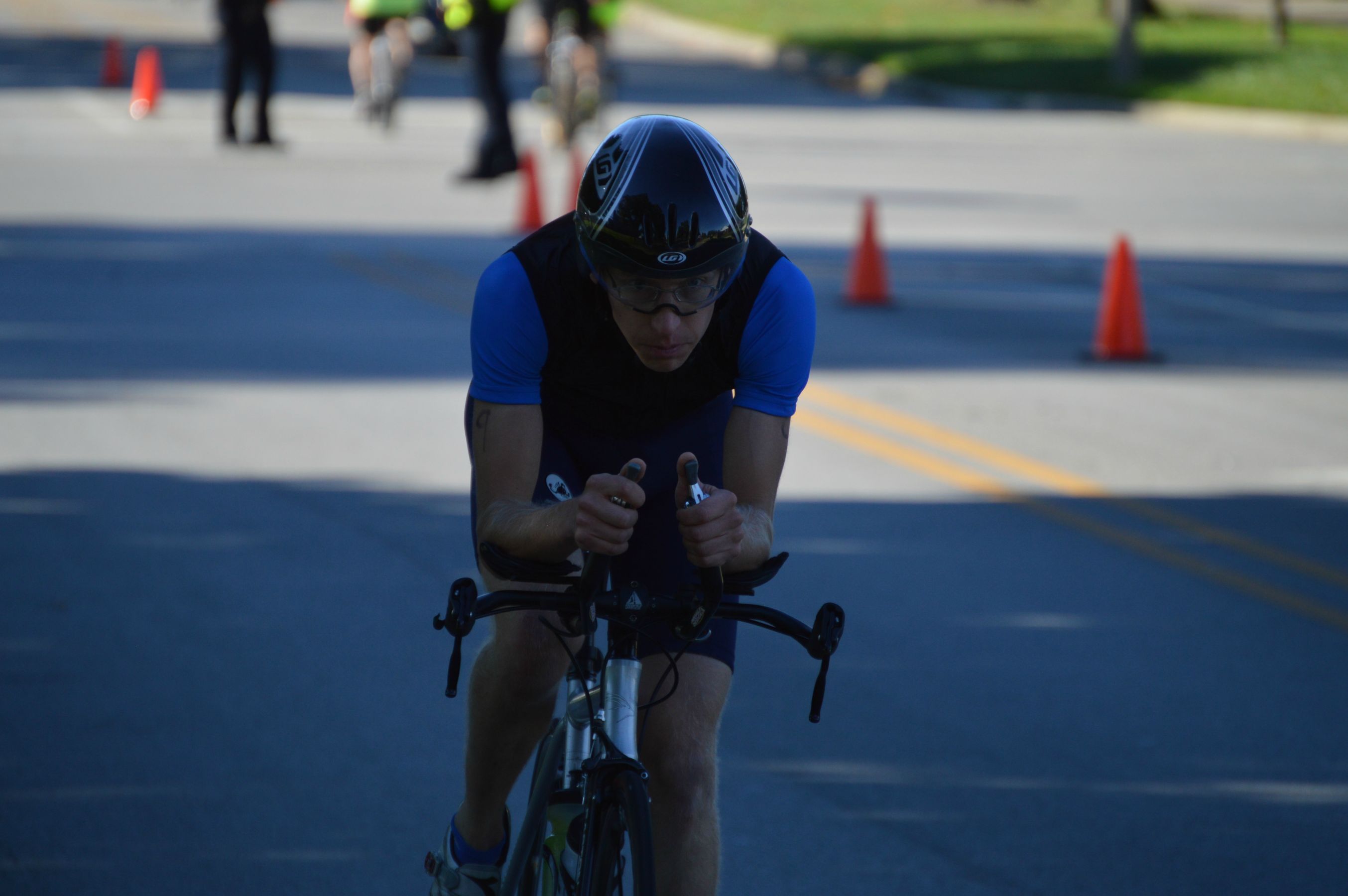 Tyler Denmead (24/8/2): Tyler blurs the distinction between beginner and elite triathlete. Racing a road bike with clip-on aerobars, he took every corner and the 180-turnaround like a cat 1 crit rider. Here he is chewing up a water bottle with the same aplomb that he chews up corners. 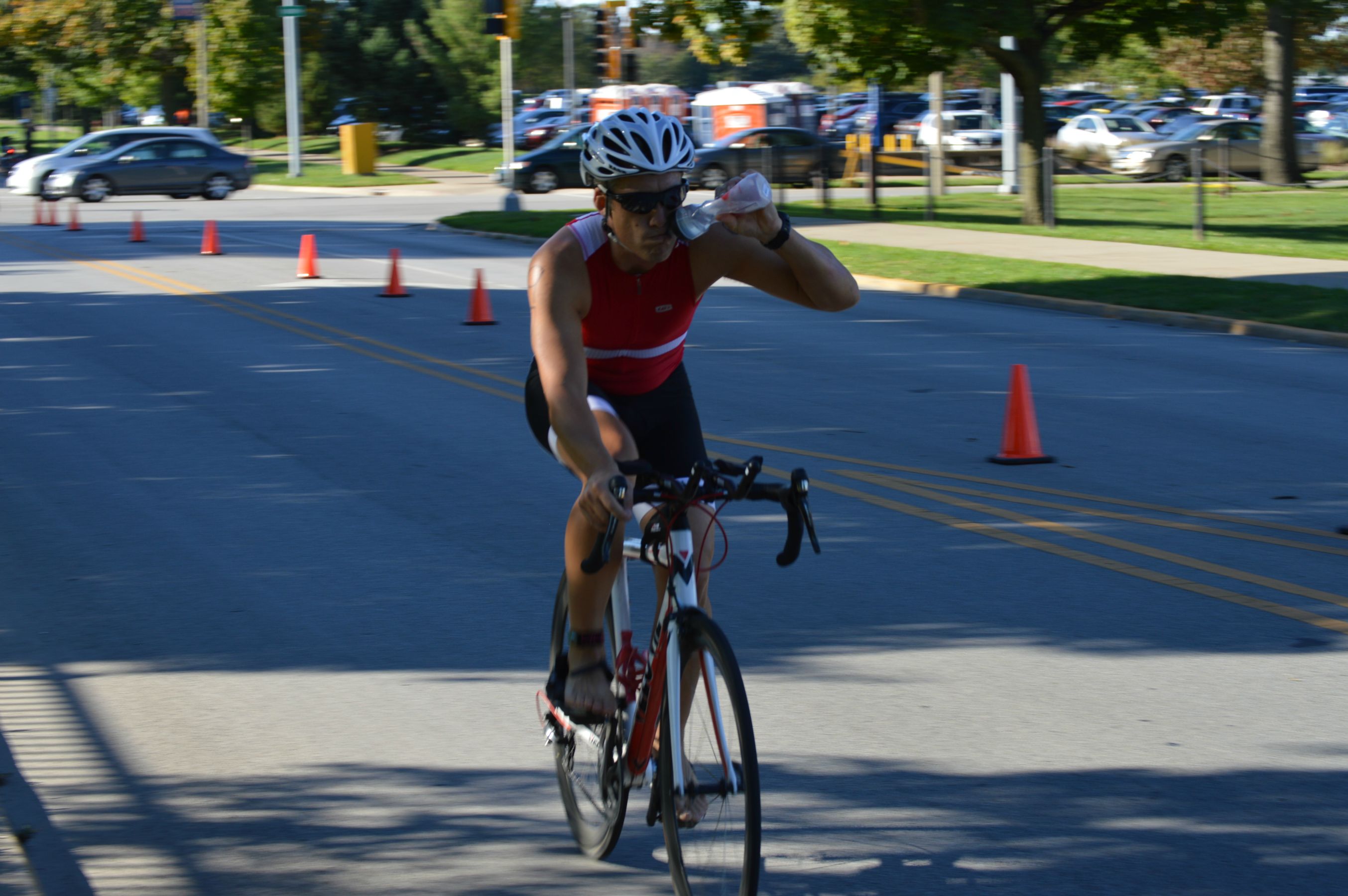 Nick Paulson (46/14/3): Well-balanced swim/bike/run splits secured Nick's spot on the podium. He was spotted kicking it to the finish ahead of an Illini kid with a much lower start number. 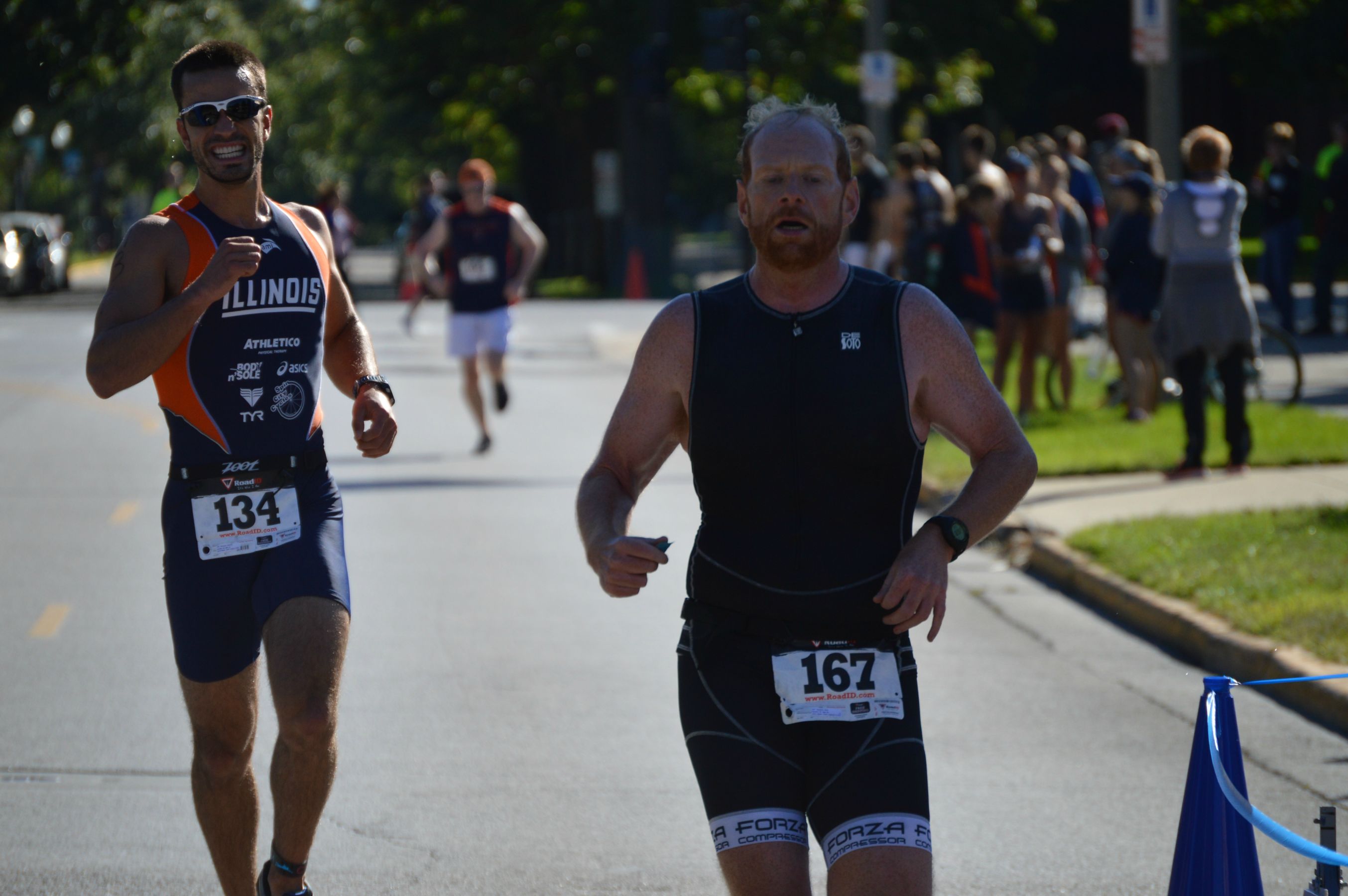 To top it off, Kate, Rikki, Scott, Tom, and Tyler punched their tickets to the 2016 USAT Age Group National Championship with top 10% performances. We might need to charter a team bus to Omaha!

Full results: Check out that 6-7-8 straight on the age-grouper list. Just Wild Card putting together another nice poker hand!