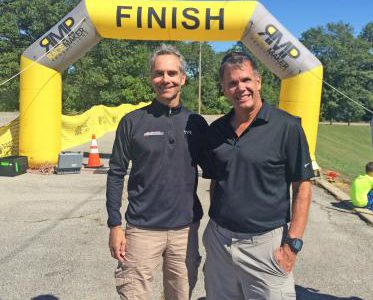 ​Martin’s short report: Ron Hoyne and I headed out to Litchfield S of Springfield to race a sprint tri: 400 m swim, 13 mi. bike, 5k run. The weather was perfect, and I finished 3d overall, and Ron 1st in age group. Photo: hanging out at the finish. 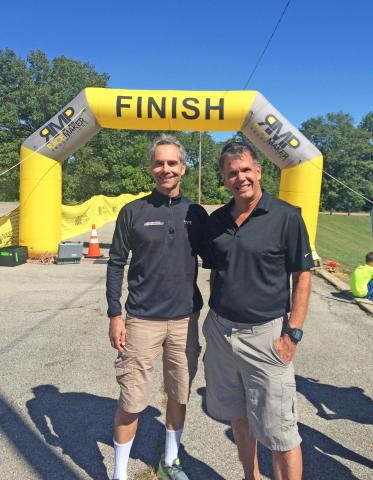 The long: Ron mentioned this tri to me, and 3 weeks before Ironman Chattanooga, my right foot still hurting from the Stovepipe accident (see June report), I was game to test how painful a half marathon would be starting with a fast 3.1 mile run. This would be Ron’s first tri since his bike accident, and he was curious how various half-healed bones would hold up.

We left Champaign around 4:50 AM and headed to Lake Lou Yeager S of Springfield. After getting our bib numbers, timing chips and hot pink swim caps, we stationed our bikes in transition. The temperature was in the 50s when the start gun went off and everyone rushed into the water through a yellow inflatable arch. Predictably, Ron beat me in the 7 minute swim by 45 seconds, even though he was putting in no effort due to his broken collarbone.

On the bike, I revved it up to 24.1 mph despite an 11-turn course, and went from 16th after the swim into the overall lead. After a quick bike-run transition, I set off on the now much hotter (low 70s) run, which was quite hilly. At the turnaround, I saw two younger guys in the distance, and sure enough, they closed in on me as we approached the finish. Somehow I picked up my heart rate from 162 to 170 to limit the damage, and came in third overall for the bronze, which consisted of a nice hydration system and a large jar of protein muscle powder. The latter may be a hint from the gods of triathlon that I would have won overall if I did more upper body training, and had swum just 13 seconds faster.

Still warm from the finish, I went out and did another 6.2 mile run, chatting with my PCC cycling buddy Jeff Decker from Urbana, who was on his Olympic run. When he was done, I put in another 3 miles to get close to a half marathon. My right foot hurt very noticeably by that point, but I think I’ll make it through the marathon at IM Chattanooga.

In the meantime, Ron was cruising through the bike. I had passed him in transition by running like a devil up a ¼ mile of stairs, concrete and sand paths that separated T1 from the lake shore. He pumped it up to 20-21 mph, dropping people in his age group until he was in the lead. He easily maintained his lead through the run, which was getting quite warm at that point. He didn’t appreciate a steep climb after the run turnaround any more than I did. Ron found me when I came back from my run, and we packed everything away before the awards, where he was also bestowed a hydration jug.

As always, race director Lee O’Connor had put on an excellent event, although he missed half his racers because Collegiate Nationals were on the same day in Dayton. Ron and I downed some Casey’s pizza on the drive home, and chatted about how we could talk Ryan Linne, Nick Paulson and Scott Dahman into doing Nationals in Omaha next year (Suzanne Rinehart does not need to be talked into it).