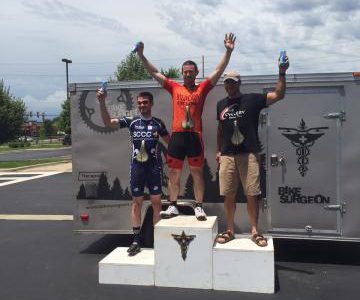 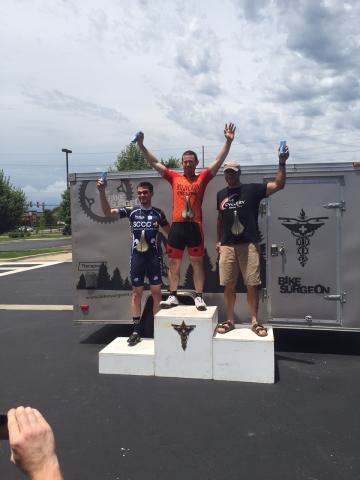 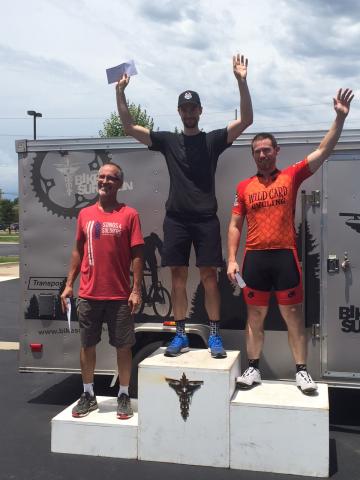 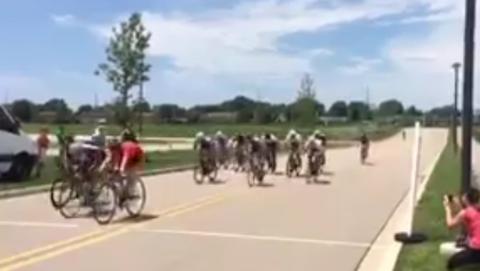 Individual Time Trial:
The opening leg of this 3 event omnium is a 13.1 mile ITT in Lebanon.  The weather forecast for this race was miserable.  100% chance of rain and thunderstorms all day, but despite a little rain during the warmup, I stayed dry throughout the race.  Part of the course was flooded, so they shortened the course to a 9.1 mile loop, which was fine by me.  My strategy for the omnium was to just finish the time trial with about a 90% effort so I could save my efforts for the road race, and especially the criterium, which is where I expected to score some omnium points.  It turns out the weather must have scared a lot of “day-of” registrants away, because only 12 people lined up to race in my category.  The top 10 scored omnium points, so I figured I might as well go all out and see how many points I could get today.

After I rolled out, I went way, way too hard.  This was my first ITT and you can tell I was inexperienced.  I told myself that I was going to try to average 290w. In the first 75 seconds, my average power was 331w.  After 5 minutes, it was still about 297w, but my HR had climbed to over 180 and I could feel the burning starting.  I eventually calmed down and leveled out my pace, by the hard start hurt me.  I started cramping with about 3 miles to go.  With 2 to go I was in a lot of pain, but close enough that I knew I could gut it out.  The last kilometer hurt, but I finished the last minute at a 400w average, so I had just enough that I didn’t look pathetic crossing the line.  Resulted were posted late that night and I got 6th out of the 12, securing 5 points for the overall.

Road Race:
The next morning, I headed down for the relatively short 40 mile road race.  Road race distance was the main reason I chose to do the masters rather than the 4’s.  The 4’s road race was 60 miles, and sadly that would have been the longest bike ride of the year for me if I had done it.

The race was relatively uneventful.  The first lap was completely useless.  The most exciting thing that happened was when I hit a pothole while trying to feed and I squirted chocolate outrage GU all over my beard, computer, and right hand.  Toward that end of the first lap, I saw the 1k to go sign and started fishing the water bottle out of my rear jersey pocket so that I could toss my empty in the feed zone.  I didn’t realize then that Simmons Hill is right before the final left hand turn.  This isn’t a brutal climb, but it features a 5-7% grade over a distance of about .2 miles.  I already had my third water bottle in my hand by the time I saw the hill, so there was nothing I could do other than stick the half-full water bottle in my teeth and hope I didn’t drop it or pull any of my teeth out of place.  I survived and recovered through the feed zone to get ready for lap 2.

Lap 2 got interesting in the second half.  I spent most of the first half sitting on the back of the group since I didn’t see the point in fighting for position.  There was a fast, twisty descent with about 10 to go.  I decided that after this descent, I would begin slowly working my way to the front.  I was about halfway up when some attacks started to go.  It was getting difficult to move up and with about 6 miles to go, I was concerned that I wasn’t going to make it up there.  I stayed patient and grabbed positions when the opportunities presented themselves.  After seeing the hill at the finish in the first lap, my game plan was pretty simple: hit the front at the start of that hill and go all out on the climb to preserve my position.  I knew I wouldn’t have much sprint left after that, but if I gave it everything I had, I might be able to preserve a top 10.  I started getting panicky as the hill got nearer and nearer, but eventually the whole field shifted left while I was on the right side, and I was able to move right up into position.  I fought to the front at the hill and did exactly what I told myself I was going to do.  I heard a crash behind me on the climb that ended up taking several riders down with it.  A rider got a flat on the steepest portion of the hill and went down, apparently breaking his collarbone in the process.  This was shame because it was a very clean and safe race, just bad luck today.

I was completely gassed after cresting the hill, but I made the left hand turn in 6th position.  3 riders quickly came around me and I thought, “Great, here goes my race”, but as I looked behind me, there was a huge gap back to the rest of the field.  I kept going hard and saw another rider starting to fade.  I caught him with plenty of room to go and finished in 8th, about 3 seconds off the winner, who was also the winner of the time trial the night before, and had also raced the cat 5 road race earlier in the day and got 3rd in it.  Thankfully he wasn’t registered for the omnium, because he would have practically sealed the win right there.  I scooped up 3 more omnium points and also noticed that 7 of the top 10 finishers were not registered for the omnium.  Only the 6th, 7th, and 8th place (myself) finishers were in the omnium, so I was tied for second with 8 points going into the final day. The leader was John Slosar from The Cyclery, with 14 points.

Criterium:
This year’s criterium course was a 1.3 mile circuit with 5 turns and a few more sweepers.  It’s on the campus of Southwest Illinois College and featured a combination of the smoothly paved roads circling the campus as well as some blacktop parking lot roads.  It rained during the morning races and I watched lots of riders go down in the quick succession of 3 turns that made up the first 3 corners in a right-left-right pattern that required setting up at the right speed, swerving hard to the opposite side, then doing it again.  The finish was tailwind downhill.  I was licking my chops for a shot at this sprint.  Being 190 lbs in a criterium isn’t an advantage very often, but a downhill drag race sprint is right up my alley.

Regarding the omnium, I really only had my sights set on a podium.  John Slosar was 6 points ahead and only needed 4th place to lock in the victory.  Meanwhile, I was tied for 2nd with 8 points and had a ton of people right behind me by just a point or two.  Losing to any of those people would knock me down a spot.  I could look at 10 different scenarios of how things might play out, but there was only 1 strategy that made sense: try to win the race.

This race started fast.  I had trouble getting clipped in and went to the back of the field right away.  A few riders ahead of me were letting big gaps open in the technical corners 1, 2, and 3.  I got around them right away and just decided to go up front.  An attack left with 2 rid
ers, one from Bloomington Cycle and one from Korte.  The Korte rider was dropped pretty quickly, leaving the Bloomington rider in a solo break.  The field was extremely composed about this.  We did a little bickering about who should be working.  Obviously all the omnium contenders didn’t want to put in any efforts, but no one else seemed willing to make the charge.  A few of us ended up doing some work to keep the gap at about 20-30 seconds.  I put in some pulls as well along with John Slosar.  I just tried to make sure I was doing less work than the other guys.  We reeled in the break after about 4 laps.  I didn’t want to catch him that early and said something to a Mack rider who was closing in on him fast.  The Mack rider pulled off and let me go up front since I obviously had all the answers.  By then he was pretty much caught and it was gruppo compacto with over half the race to go.  A few counter attacks were launched, but nothing else got away.  It kept the race hard, which I appreciated.  I was hoping my time at the front would put some hurt on the back of the field.  Not many seemed to be getting dropped, which was discouraging since we had been chasing and counter-attacking the entire race.  A prime was announced with the field together and I worked my way up front to protect position and be on guard for attacks.  I ended up getting a first-rate scouting report on the wheel I needed to follow for the finish.  A lot of people contested the prime, but one guy who wasn’t in the omnium torched everyone and had a big enough gap after the finish line that I was surprised he didn’t just keep rolling with it and stay off.  The rest of the race featured some more attacks and counters, but nothing stuck.  With a half lap to go, I got caught a little out of position, but worked my way up the left side and boxed in Edgar, who was the guy I was tied with in 2nd place.  Before the final turn, I saw a gap open in the middle.  I would be boxed in, but 2nd wheel with a clear shot at marking the wheel of the powerful sprinter that won the prime.  I jumped and took the gap, knowing I just took a big gamble with my race.  John Slosar jumped early, before the final turn.  That signaled the start of the early sprint and I got out of the saddle and tried to follow the guy who won the prime.  He was way too tough to catch, but I was gaining on the rest of the field until there was only 1 guy left in front of me.  I threw my bike hard at the line and took 2nd by about a ¼ of a wheel length.  I pumped my fist as I coasted past my sister and her husband who were there to watch me.  I knew I had secured 2nd place in the omnium and I was thrilled with that.  I’ve never been on a podium before, and today I would be standing on 2!  In the cool down lap, John Slosar told me he got 6th.  I spent the rest of the lap doing math in my head.  I got 13 points, John got 5.  I was down by 6 before the race.  The guy who won isn’t in the omnium.  No one else had more points than me.  Holy shit, I just won the whole fuckin thing!

I nervously hung out by the registration table awaiting the podium.  The official results came out for the crit and my 2nd place was confirmed.  As long as my math was correct, I knew I had it won.  I knew it was a done deal when a few of the other riders started coming over to me and telling me they thought I won too.  What I didn’t realize was that the time trial is the tiebreaker.  I only beat John by 2 points and he beat me in the time trial.  If I had only got 3rd in the criterium, I would have been tied on points and lost the tiebreaker.  I literally won the omnium by a bike throw.