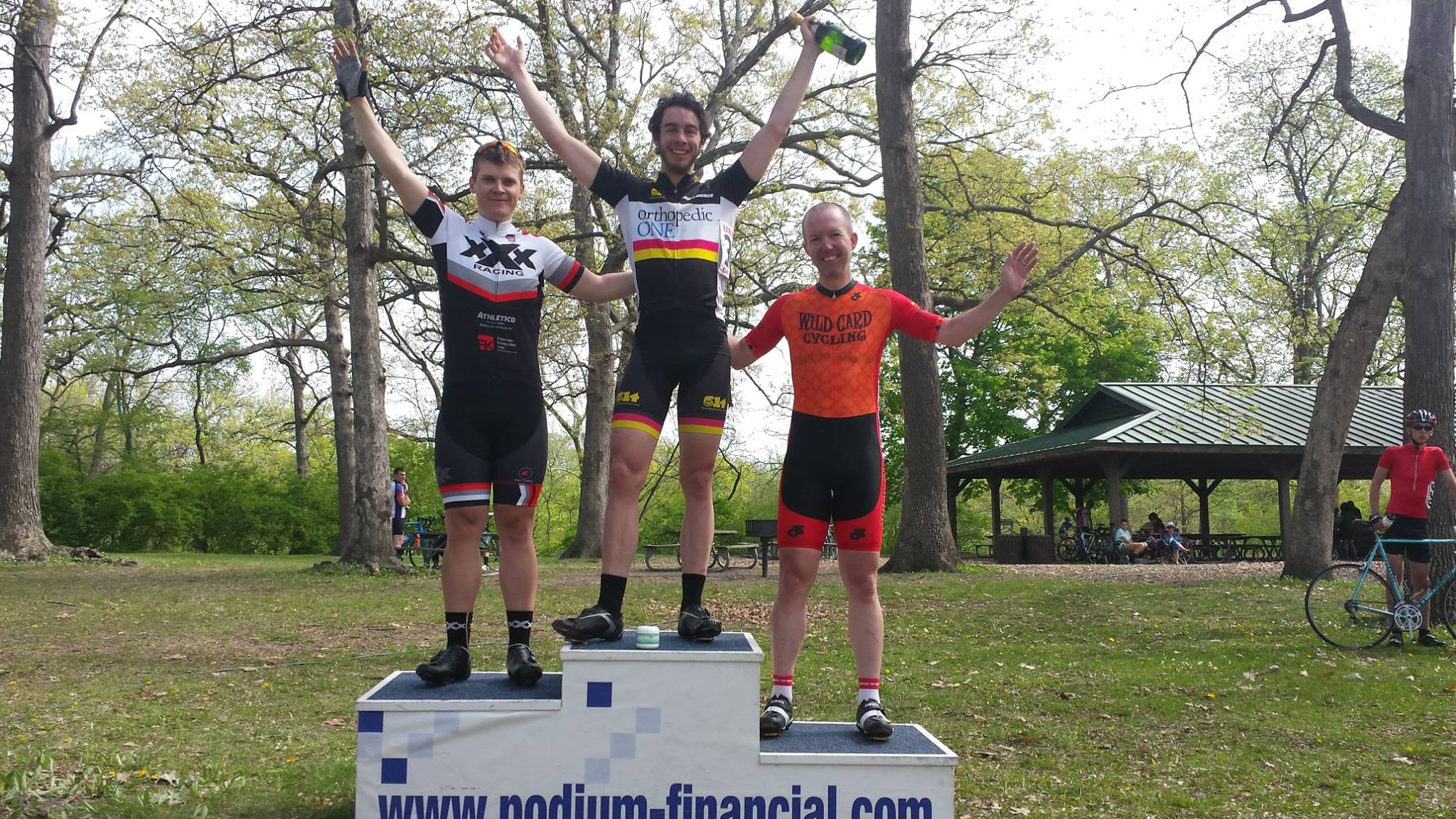 There were six wild cards in this race, so we knew that we had a good chance to control the race. I was feeling a bit antsy and decided to ramp up the pace for the first few laps with the expectation we would shed a bunch of the racers off the back early. That seemed to work and I was leading the pack through I believe the first 3 laps. After that I sat in for a bit toward the front, but out of the wind. I think at that point we had narrowed it down to about 15-20 guys. I talked to Tyler and he offered to help set me up for the prem on the next lap. I sat on Tyler's wheel and when we hit the hill on the last corner I started a sprint and opened up a gap of about 10 meters or so easily taking the prem. I sank back into the group and tried not to work too much for the next several laps. Chris K. showed back up in the pack (I was unaware that he had crashed and was re-inserted). He decided to start an attack, so I jumped on his wheel as he took off. The attack was not away for long, the guys that were left were a pretty strong bunch. With a few laps to go I decided to stay out of the wind to save up my energy for the final lap. The final lap started off pretty hot, but by the time we turned off of Broadway it had settled back down again. It stayed this way until we were approaching the hill on the last corner. At this point I decided to launch an attack from the back of the field. I opened a small gap going up the hill, but was quickly caught and passed by the winner (kid had a hell of a sprint!), and barely edged out by a few inches by a XXX rider. Wound up with 3rd place and a podium on my 1st complete race of the season. I was pretty happy with myself. I was pretty happy with how we did as a team as well. 5 of us in the top 11 isn't too shabby. Special thanks to Chris, David, and Tyler for sitting up front with me for most (if not all) of the race.
cat 3/4 race
We had several riders in this one too, including our strong man Neil. I had planned on sitting in for most of this race and seeing how I felt before trying anything. Unfortunately I wouldn't get that chance. The pace started off very slowly. I'd be interested to see the average speed comparisons between the 4/5 and the 3/4. My average speed on the 4/5 was over 25mph, the 1st lap in the 3/4 was slow and sketchy. There were people all over the place trying to find lines and it was a hot mess. Not sure why at this particular race, the 3/4's are way sketchier than the 4/5 but it was the same last year. We came around on the first lap and I seen a rider go down just as we pass the judges table. I avoided this one, only to have another one go down in front of me. In the process of trying to avoid the 2nd guy I ran my front wheel into the curb and was launched over the handlebars. Someone said I did a cartwheel and hit the pole (which would explain the odd angle). I don't remember doing a cart wheel, but I do remember seeing the pole coming up and thinking "OH SHIT!". What I'm sure looked like a horrible accident wound up being some bruises and scrapes and a small puncture on my shin. I was taken away in an ambulance after they had stopped the race (which apparently shortened it you guys can thank me later) just to be safe. I was in and out of the emergency room in about an hour and a half. Walked back over to the race and volunteered for the rest of the day. Had several conversations with people through the rest of the afternoon, a couple of them went like "Did you hear about the guy that was taken away in an ambulance? I heard he broke his pelvis!". 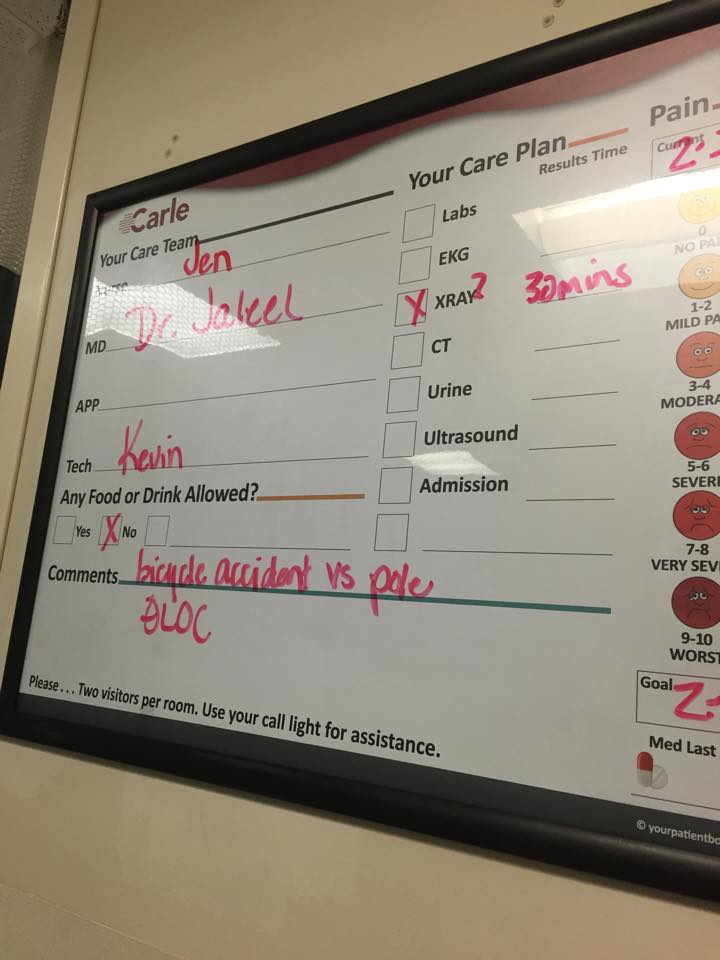 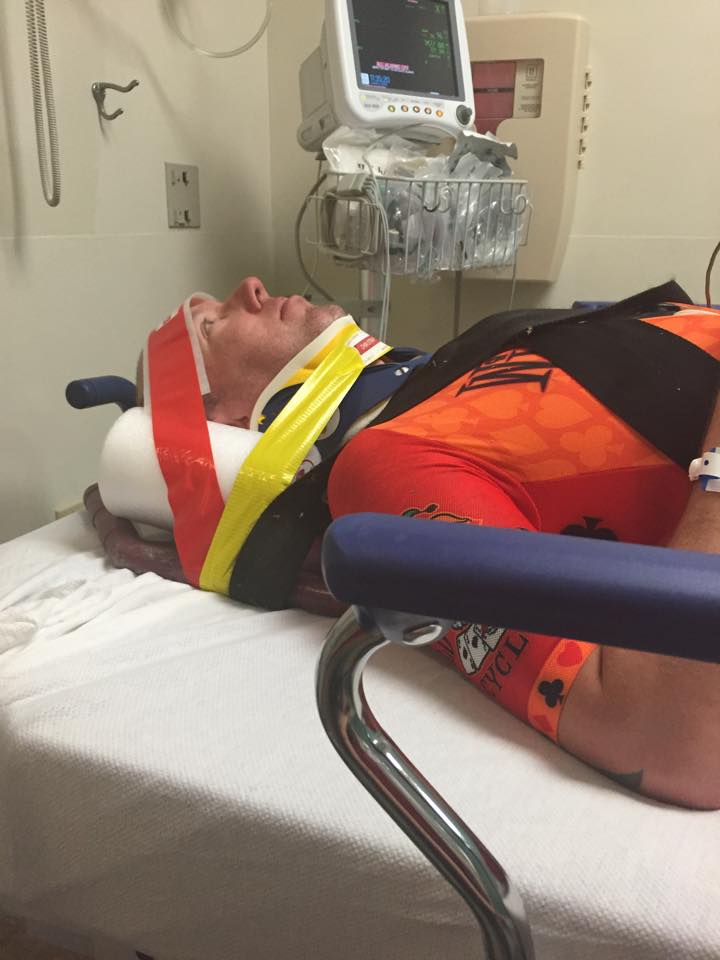 All in all I won a little money, lost a shifter and a tube, took an expensive car ride, and bought an expensive band-aid. Thanks to everyone that reached out in concern, and those that came to my assistance after the crash. A good day all in all despite the bad stuff that happened.
News, Race Reports