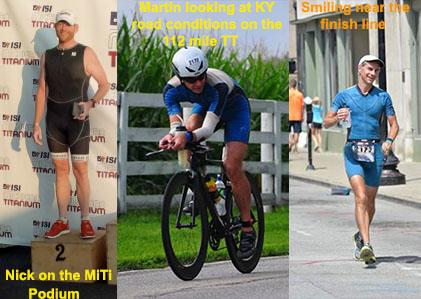 Reported by Martin. The short: Nick Paulson and I headed off to two different Iron races: MiTi in Michigan, and IM Louisville. And we were not the only ones from town, with Illinois student Tim Lichtenstein and Professor Bruce Hajek also heading to Louisville. It was a hot+humid sufferfest!

The long: I headed down to Louisville for #8 of my season’s Ironmans. Afternoon temperatures were predicted to rise into the 90s, with heat index into the 100s. Bruce Hajek met up with his sister Kathy, who had driven in from Atlanta after Bruce convinced her to do an Ironman. We had a great pre-race dinner at Pesto’s.

After my experience in Boulder (highest altitude I’ve raced), I was doing this one by the book, since it was the hottest IM I’ve raced. In 2010, I blew up on the Louisville run after riding 145 bpm on the bike, in 2011 I had too much left in the tank racing at 135 bpm. This time I picked 139 bpm for the ride and run, which worked well at several races. I was hoping for 1:20/5:45/4:15 swim/bike/run – the latter was way too optimistic in the intense heat.

The 1:20 swim was typical for me and uneventful, except a little Ohio river water leaked into my right goggle, and my eye had to be treated with antibiotics for an infection afterwards! DON’T SWIM in the Ohio River! I started the bike at 142 bpm and simmered it down to a 139 average to rest my legs a little for the run. The 5:45 was as expected in this hilly and hot venue, about 20 minutes slower than my typical cool/flat bike portions. Constant dousing of my helmet with water kept me rolling at a good clip. So far so good.

On the run I also started at 142 and simmered down to 139, and my head felt good with the cap-and-icewater. However, with the 100+ afternoon heat index, 140±2 bpm meant jogging an 11 minute mile. My stomach was upset even at sips of coke in the intense heat, so I walked a couple of minutes after several aid stations to let it settle, slowing me down even further. I kept a steady jog punctuated by brief aid stations walks, speeding up a little for the last couple of miles to use up what few reserves were left.

Louisville has a great downtown finish with a screaming crowd. I missed my 11:30 goal by 40 minutes due to the slow run, but in this intense heat I could not have gone faster. Upping my heart rate on the run would simply have gotten me to throw up, a big no-no. 23/156 in age group. With plenty of statistics in hand from many IM and marathon races, I can say that every 10 F of heat index above 65 F slows my IM by about ½ hour: hence a 10:48 in Cairns at 74 F HI, and a 12:10 in Louisville at 101 F HI despite similar bike and run profiles.

Tim Lichtenstein finished well sub-12 in his first IM, thanks to a strong sub-hour swim, although the swim start was a surprise for him. It’s a first-come-first-serve start without self-seeding, so he ended up in the water 17 minutes after the gun went off. Tim lost his timing chip in the water battle among swimmers, but it was replaced efficiently in transition and he rode a strong 5:50 bike segment. Like I, Tim put vaseline on his feet to protect them from sweat in the heat; a MUST at temperatures above 80 F in my opinion. His run was as brutal as everyone else’s, and Tim had trouble keeping his heart rate below 160. Although thoughts of just stopping crossed his mind, a pep talk from another runner renewed his spirits. Like I, he had to walk through some of the aid stations to allow his core to cool back down, but at the end, he picked it up considerably – his parents almost missed him at the finish line!  Bruce had a double flat on the bike that delayed his ride by over 2 hours; I saw him standing in the road as though looking for something. He persisted on the marathon and finished well within the cutoff. This must mean good luck lies ahead in Wisconsin! His sister Kathy finished her first IM strong with well-matched splits in just over 14 hours, hydrating well on the bike and alternating walking and running when it got miserably hot on the run.

At the same time that we were suffering in the south, Nick Paulson headed north. Michigan Titanium (MiTi) is a Grand Rapids event that offers full and half iron distance races, including aquabike and relay options (Ron?).  The race course includes the swim and transition at Versluis Park (cleaner water than the Ohio River!), a rolling bike route through rural areas northeast of Grand Rapids, and a closed running course through an area neighborhood that includes some pretty hard climbs. This was Nick’s second attempt at the full iron distance.  While he improved his previous finish time by 34 minutes, he also learned some hard lessons about running a full marathon on a hot August day.

Nick went out at an easy pace for the swim, drafting when he could, and finished in a respectable 1:17. The bike was also a success as there was cloud cover and a welcomed breeze for the first half of the ride.  He completed the 112 mile course in just under 5:55, carefully monitoring his heart rate to make sure he had enough left for the run. He felt fresh coming off the bike and like I was thinking that 11:30 was attainable.

Nick started the marathon with mile splits which averaged just over 9 minutes while keeping his heart rate in his safe zone. However, as the cloud cover disappeared and temperatures rose to the mid-80s, things started to go wrong half-way through. Nick had been taking salt tablets every 45-60 minutes, but it is recommended to take one every 30 minutes under heavy sweating conditions, and he was way beyond heavy sweating. After walking 2 miles, he was able to settle his dizziness and upset stomach with Endurolytes and salty snacks at the aid stations. From that point he jogged to the finish line in 12 minute miles.

Nick ended up finishing in 12:17 and taking second in his age group. While MiTi is not as large as an official Ironman brand event, getting a podium spot in an iron distance triathlon is pretty cool.

Nick and I will race together at Ironman Cozumel. In the meantime, IM Wisconsin and IM Maryland hopefully will be cooler than Louisville!