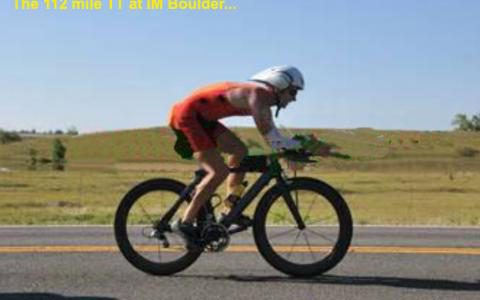 Reported by Martin G. The short: not one, not two, not three, but four U of I faculty went to race the inaugural Ironman Boulder. Bruce Hajek, Andy Singer, Brian Lilly and I headed west to see what Ironman racing at 5400 feet feels like. That run got tough, and I squeaked in at 11:56, just under 12 hours. 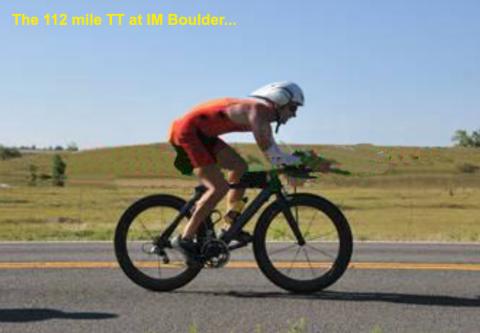 The long: Boulder is a beautiful location near Denver at 5400 feet. The inaugural Ironman Boulder was well organized: A 2.4 mile wetsuit-legal (!) single loop swim in Boulder Basin, an undulating 112 mile bike leg on country roads northeast of Boulder, and a flat and partly shaded marathon run along a creek that runs by Boulder High School, where the second transition area and check-in were located. It was going to be a hot ~86 F race day, but I am now confident in the ‘hat trick’ (see previous posts).

I drove out through towns such as Topeka (Kansas capital where I stayed the night), Manhattan, Kansas (which billed itself as the “Little Apple”!), and Abilene (where “Ike” Eisenhower bas born and raised). On Friday afternoon I checked into my AirB&B apartment, right next to the Ironman finish line on Pearl Street. I panicked a bit when my TT bike would not shift properly, but found and fixed the cause: I had misrouted the rear derailleur cable when reassembling it after Ironman Cairns. Easily fixed, and it ran like a charm afterwards. On Saturday I checked the bike into T1 at the Reservoir, and the run bag into T2 at the finish. Then I sat around thinking, and thinking can be fatal.

When you live and train at sea level, your VO2max and endurance performance at altitude declines due to lower oxygen pressure. At 5400 feet, you end up about 9% slower at the same heart rate, so I expected an 11:40 Ironman (1:25 swim, 5:45 bike and 4:15 run, plus transiitions). But then I had a ‘clever’ idea: why not increase my heart rate a bit to make my muscles do the same work as usual? I am muscle-mass limited, especially on the swim. Unfortunately, I neglected to think that through: a lower VO2max at high altitude also means burning more carbohydrate and less fat, even if my legs felt the same as usual.

It worked well enough on the bike and swim. I upped my heart rate from the usual 120 to 145 on the swim. The 1:18 swim was faster than my average. I upped my heart rate from my standard 137 to 144 on the bike, and came in at 5:31, not far off from similarly hilly courses at sea level (e.g. Cairns). My legs were feeling great even though it had gotten very hot during the bike ride. So if it works on the swim and bike, it should work on the run, right? Readers of my IM Texas report know the answer: WRONG. Back then, I tried an experiment upping my nutrition instead of my heart rate. It failed miserably on the run.

I started the run at 150 bpm, 10 beats up from my usual target of 140 bpm. I ran a 9:00/mile, not bad in the heat. It went OK for the first 13 miles although I began to feel queasy and gradually slowed down. I should have known better. At mile 13, the survival zone between eating too little and bonking, and eating to much and getting sick, vanished. I had erred on the 'too much’ side and threw up the last 2 hours' nutrition. Meltdown! Fortunately, I know the drill to salvage what I could of the run: My stomach feels good again within 10 minutes after emptying, so after walking a mile to the next aid station, I could sip a coke and eat a small piece of banana and some grapes. Same at the next aid station. After about 3 miles, I felt better and started running again. This time not a beat above 140 to prevent a recurrence! I gradually felt better and better, and finished with a 9:00/mile. But over 40 minutes of run time were wasted on this heart rate experiment. As a result my IM was 20 minutes slower instead of 20 minutes faster than my anticipated baseline at 140 bpm.

When you do 10 of these a year, you have to do some experimenting, otherwise it gets boring. As far as I’m concerned, the results are in now: On the swim and bike, I can add 1 beat/1000 ft (the Boulder experiment), and eat a gel every 30 minutes instead of every 45 minutes for the first 4 hours (the IM Texas food experiment, confirmed in Cairns and Coeur d’Alene). But on the run, from now on it’s strictly 140 bpm max, coke, and a gel at most every 45 minutes or when the stomach feels like it. Period.

Looking at the splits, Bruce raced a much more balanced race than I did, finishing with a strong 12:36. Andy must have experimented with some “up the heart rate” ideas like I did – and smelled the roses, like I did! Brian felt heat and altitude sickness on the bike, and called it a day to be safe.

Next up: Louisville-Wisonsin-Maryland, an IM every 2 weeks.