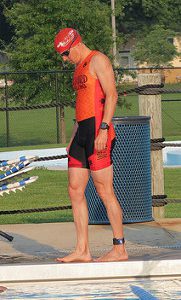 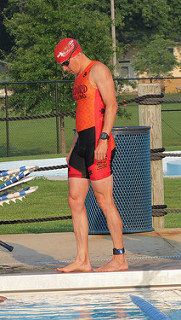 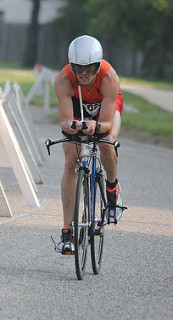 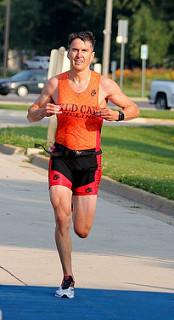 The Champaign Park District hosted its 32nd annual Mini Tri on August 2. The family-friendly event must be one of the longest continuously running triathlons in the Midwest, originating just 6 years after the first Hawaii Ironman and within 9 years of the first modern triathlon in San Diego. As in 2013, I used the race as a short, high-intensity tune-up to the USAT Age Group National Championships. Tom Carlson also raced.

This year, the organizers scrapped the gimmicky lazy river swim and began the race with 200 yards in Sholem's lap pool. I exited the pool in my predicted time of 3 minutes and raced to the transition area. The short bike and run courses, just under 6 and 2 miles, respectively, placed a high premium on transitions. I again used running shoes without socks for both bike and run to save as many precious seconds as possible. The bike leg was very intense for triathlon, with many accelerations out of corners and heavy traffic from slower cyclists and careless pedestrians crossing the course. My average bike wattage in this race is usually no higher than in a 40k Olympic triathlon! Tom had a late start time and was concerned about course traffic, but many had finished the bike leg before he began and it wasn't any worse than prior years.

Transitioning to the run, there were just 4 fellow competitors ahead of me on course. All had started ahead of me in the time-trial format, so I would have a good chance of winning if I could reel them in. I passed the last one at the half-way point, but sensed another competitor closing fast. It was the eventual overall female winner and 2013 News-Gazette cross-country runner of the year. She passed me with about 400 meters to go, which I used as motivation to engage my finishing kick. I kept her within several seconds to the finish, though she beat me soundly in the run split. Each year it gets harder to find the top gear for this distance. I am certain I could have finished with a 5k run at about the same pace.

The competition was a little stronger this year than last, but I survived several challenges from racers with later start times to win the overall title for the second year running. Tom posted very similar splits to mine, just seconds back in each discipline, to finish 4th overall. 2nd place was won by Chris Haydel, someone I know well from ski racing circles (actually snowboard racing for Chris). He was an NCAA Division 1 runner and continues to run at a very high level across all distances, but fortunately he does not train swimming and cycling much. I edged him by just 5.1 seconds, aided by my top overall bike split. Tom seemed to struggle at times on the bike, but was still 2nd in the bike split. (It is quite likely that Tom and I were the only racers who regularly ride more than 20 miles per week!) Tom also owned the fastest bike-run transition of 13.6 seconds! Maybe he just left a little extra in the tank on the bike. The top 5 finish times were within 1 minute of each other. (results)

After my finish, I roamed the course to cheer my daughter. She struggled at times due to limited training. (12-year old girls can find a hundred things to fill a summer day besides swim, bike, and run.) But I was proud of how she fought through and pulled it together for a strong finish. 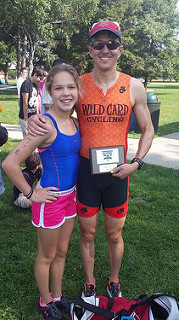