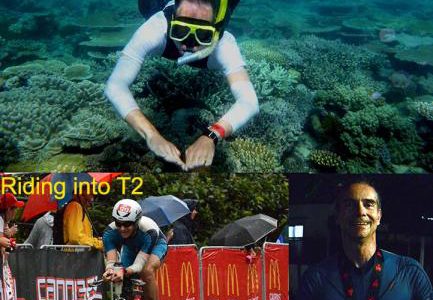 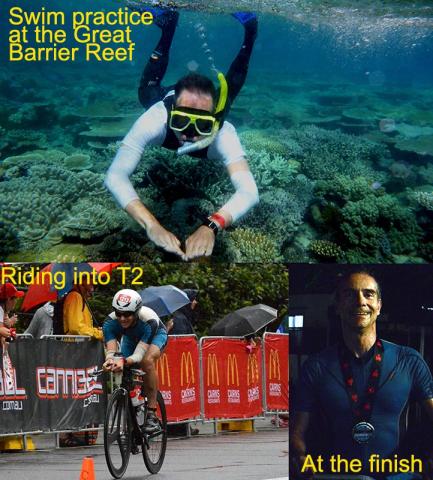 The short: 10:48 total, 3:45 new Ironman marathon PR, 11th in 50-54 age group: Best rank yet, clawing my way to the top 10 where rolldown qualification for Kona becomes plausible…  Still no ‘hot’ sub-4 IM-marathon: a tropical storm came through, it rained all day, and the temperature dropped to 70 F.

The long: Cairns is a sub-tropical paradise in northeastern Australia. I flew in the Wednesday before with my family, and gave a lecture on Thursday at James Cook University, which has an outstanding tropical medicine institute. On Friday I went on a snorkling trip at the Great Barrier Reef, getting in some last minute swim training (see photo). On Saturday I dropped off my bike at a pre-arranged truck to be taken to the swim-bike transition in Palm Cove, 15 miles north of Cairns. They forecast a tropical storm for Sunday, and boy, were they right.

When I left the hotel at 4:30 AM, it was pouring, and it never let off for a minute during the whole entire day. A tip for those thinking about IM Cairns: forget the 4:50 AM bus; if the race starts at 7:45 AM, take a bus at 5:45 with the spectators/family, the ride is 30 minutes, still giving you ½ hour in transition, and less wait. The transition area was a mud bath when I got there. 1000s of racers had already trampled what grass there once was into slush. I double checked my bike: in their wisdom, the truck handlers had force-rotated my bar-end brake levers to hang the bike from the rack by them, and ripped one loose! No choice at this point but to race with a loose lever (which still worked). Off to the swim start.

The usual Ironman mass start was a battlefest in 3 foot waves, two loops and 2.4 miles of choppy ocean water, elbowing for room with thousands. Salt in your eyes is so much nicer than chlorine, though! Someone found my feet and drafted on me, and I let them, occasionally kicking them when they got too close while I was sighting. I managed to draft a few times myself, but not as much as I wanted. Solid (for me) 1:20 swim, considering the choppy ocean. Off to T1 and onto the bike.

The dangling brake lever turned out to be more annoying than harmful: a wiggly feel when braking instead of a nice, firm lever. The road, James Cook Highway, was grippy asphalt, a must since the pavement was competely wet in the rain. Wild Cards know that I am not a fearsome descender, but among the triathletes, I was like a fish in the water: pedaling down the wet 6% grade turns at close to 40 mph, and zooming up the next roller while passing dozens who were hesitant to keep momentum in the downpour. I passed about 400 people, and got passed by about 15, pretty typical. The turnaround in Port Douglas, 20 miles north of Cairns, was well attended by cheering spectators and a large flat-screen telly (that’s what they call it Down Under) showing the racers. The constant rain blown by a 10 mph wind soaked everything all the way through, motivating me to maintain a 137 bpm heart rate to generate enough body heat for over five hours. On to T2 after 5:28 for 112 miles.

At that heart rate on the bike, I felt fresh for the run. It was clearly going to be another sub-4 IM marathon, but not the ‘hot one’ I had hoped for. The weather had turned from blazing sun and 80 F on Saturday to gray rain and 70 F on Sunday. The limiting factor on such a marathon then becomes chafing of your feet. Fortunately, I had the necessary tools in my transition bag: a jar of vaseline to coat my foot with before putting on socks (it feels as yucky as it sounds, but it works), and ibuprofen. While other racer’s shoes were making sloshing sounds at each step, my vaseline coating kept mine dry on the inside. I went though the three loops at a heart rate of 140±2 bpm, which I held until the finish sprint. My family was there to take photos of me on the bike and run, and picked me up at the finish line to head over to a Bavarian Bierhaus we had discovered. They had pretty good veal Schnitzel and Leberkäse. Time to disassemble and pack up the bike for the next Ironman in a couple of weeks: Coeur d’Alene plus a trip to Yellowstone and Mt. Rushmore with my buddy Ron Hoyne! And if you’re astute, you noticed it’s Ironman 5/10 now, not 5/9. I signed up for the newest one in Maryland in September, close to where my brother lives, so I can use his place as a homebase.