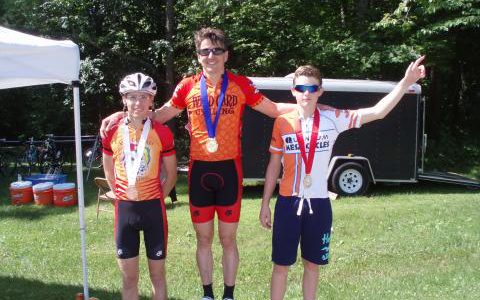 Marshall Madness was held on a 4.5 mile circuit around Lincoln Trail State Park with a moderate number of corners and some short hills. With 5 riders in the 11-man field, Wild Card had the numbers to dominate and did not disappoint. The players, in order of importance:

Austin broke up a Wild Card sweep with a strong finish. A junior rider on Wild Card alum Nick Hand's Quantum Mesa Cycles, he will be a force for years to come. Tom and Larry somehow managed to recover from their effort to take 3rd and 4th – that's 3 of the top 4 spots for Wild Card! 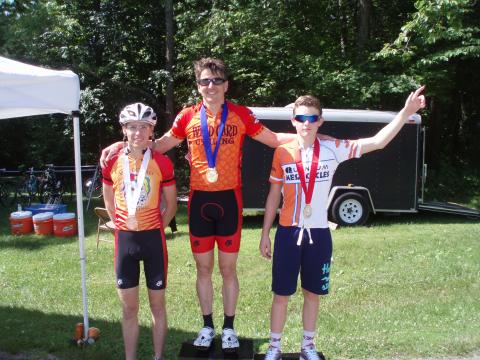 Scott, Larry Johns, Rob, and Tom Mathis were in the race with me after strong performances in the 4/5 and kindly offered to help me out. There were about 10-12 riders in the field. We raced 5 laps.

I tried to stay in the draft most of the time in the early part of the race. There were a couple attempts at breaks but nothing stuck. With a lap and a half to go, one rider went off the front. He just barely managed to stay away until the end. With about a mile to go a rider attacked, and Scott jumped on his wheel with me behind him. Shortly afterwards I rotated to the front, but didn't want to pull as I still had the mentality that I should let my teammates work for me, but they had given everything they had. This was a mistake, as the rider off the front was very close.

Anyways, the field slowed down, and shortly afterwards the same rider attacked again. I went with along with some others and was in fifth coming into the finish. I was ready to sprint, but hesitated because I had to go to the right and wasn't sure if the guy in front of me was going the same direction around the rider in front of him. Eventually I found an opening and went for it, but only had enough time to make it to third, shortly behind the guy that attacked (2nd) and the guy that had been off the front (1st). On the whole, 3rd isn't a bad result, and my best so far (at the time) as a 3, but I made multiple mistakes and had the fitness to finish better. 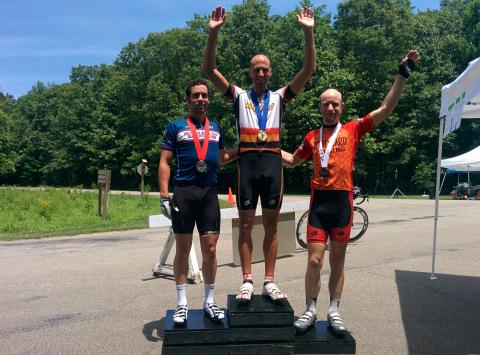 This was a 1 mile course on rough, sandy roads through a park on the banks of the Wabash with one short climb at the start of the lap, followed by a long downhill, downwind straight. Larry was again coming off a strong performance in the 4/5. There were about 20 riders in the field.

About 4 laps in Larry attacked and took 4 or so guys with him. They stayed away for a few laps, and every lap someone would bridge up. Eventually it started to look more like a split than a break, so I bridged up on the climb and back straight, making sure not to take anyone with. A lap later, most of the rest caught us.

A few laps later, maybe 40% of the way through the race, someone attacked on the back straight and someone else followed. I decided they looked strong, so I bridged up to them a few seconds later. The guy that had followed the attack dropped off soon, so it was a 2 man break. We rotated fire a while, with the other rider voluntarily doing most of the work. He was very strong, but started to fade towards the end.

With 6-7 laps to go, 3 riders managed to bridge up to us, but 2 of them immediately fell off, so it became a 3 man break. We worked together, staying well away until the last lap, when the rider that attacked originally attacked before the hill while I was on the front. I followed him and caught him on the back straight, having pulled the other guy up. I stayed on his wheel until 1/4 mile to go, when the other rider attacked. I jumped on his wheel immediately, and sprinted around him near the end for the win.

Having been in a break most of the race, I was too cooked to attempt the 1/2/3. 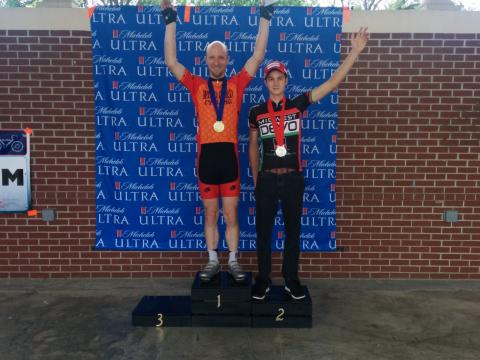