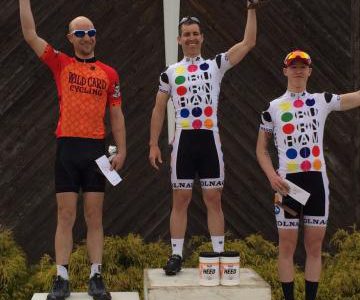 Lots of Wildcards in this race. I was hoping to be able to help out some others as I already had enough points to upgrade to cat 3. The race started innocuously enough. Jeff made a few attempts to break away in the first lap, and I blocked for a little bit, but nothing stuck. After a few attacks in the town section halway through the race, the field slowed to a crawl. At some point, a couple riders went off the front and the pace picked back up.

For some reason, I started feeling very tired even though I did not feel that I was working very hard. I tried a few times to make my way to the front to help with the chase, but ran out of gas before I got there. Several times I was afraid I would not be able to hang on until the end. Luckily I was able to recover on the road back in to town. We had caught one of the riders off the front but the other one was too far ahead.

The first climb out of the river was at a moderate pace, with everyone nervously waiting for the inevitable attack. After that climb I moved just in front of Rick and Chris, hoping I'd still be able to help them into the finish. At the start of the steep climb after the stop sign Joel made the attack, and I jumped on his wheel, hoping Rick and Chris would join. At the top of the climb it was Joel, myself, and one other rider off the front. A few more joined us on the descent and the brick climb.

I was about fifth wheel going onto the finishing strait. I looked back and did not see any Wildcards, so at that point I figured I could only race for myself. I went for it with about 250m to go and stayed in front to take 2nd. After the race, I upgraded to cat 3. 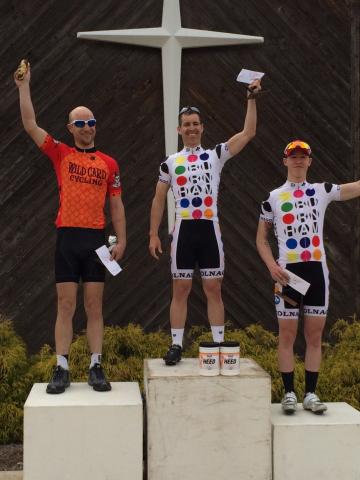