Today's race report is brought to you by the letter K and the number 26.

This is because I did my first two criteriums today and finished them in 26th place. The tl;dr is that I finished them both, the finishing fields (for W 3/4 and W Open) were 33 and 28, respectively, and the races were of length 30 and 50 minutes. Finished the first race with the group, in the second I fell off the back and kept riding until when I had just started the final lap (and I wasn't to be lapped – the race didn't end for another 2-3 minutes) an official stopped me, said I could quit and would be credited with a finish and my place. I was.

At the start of the race we lined up and I made small talk with some of the ladies around me. It was mostly pretty awkward until I realized a BFF gal had her jacket on over her jersey (to which her number was pinned) and was like "Oh hey, where's your number," and she freaked out a bit. She thanked me profusely after she figured out where it was and all the BFF gals at least relaxed around me. One of them (Mary from below) yelled "Hey Wild Card, do you know Melinda Higley?," which prompted a friendly exchange.

Early on, as the group came out of the first turn into the second there was a clatter and some swearing behind me. I didn't realize it at that point but Katie with Bonkers, who had parked next to us and was also on her own in the field, had been crashed into and then ran over. Her jersey and tights were both torn pretty good. Apparently the medical team there is awesome – they swooped in, cleaned her up, and she re-entered the race and was a little in front to the side of me when a gal made a move for the prime. I saw her make a move out but then realized I was in the way and gave up (not realizing it was me, or perhaps not aware that letting people out is kind of courteous unless it's your teammate they're chasing). I said "Hey Katie, you want out?" and when she said "Yes," I made space. She gave a really good chase. She didn't get it but for a gal that got ran over and didn't get out right away she did really well.

Karl gave me the advice of staying in the middle, not spending any time up at the front and being ready. I did a pretty good job of this in the first race but I got a little too close to the front a few times (staying in the front 3rd right up to the end), and although he said nothing about wind, I make maps for a living and had previously identified the optimal side of the group to be on for each stretch and then promptly ignored it all. I also was spinning at a pretty high cadence… which might be good for anybody but me but I think I probably should have picked a higher gear so I could (1) spin less, and (2) spend a little time out of the saddle. But I was just getting used to riding that close to other riders and it wasn't until the second race that I figured out I was comfortable with that.

Coming out of the second to last turn (of the last lap) some gals attacked from behind and I was sadly buried in bikes and couldn't get out to meet them in time. They broke away, maybe 14 of them, and I found myself at the front of the second group. This is a long course – 1.95 miles – and so I worked hard for maybe a quarter mile and then indicated to the gals behind me that I was spent and would need their help closing the gap.
They didn't move. Aaron Higley has told me that at this point I should have quit pedaling but I was an idiot and kept trying to close that gap and of course I did get closer to them, but spent myself and nearly everyone came surging around past me in the final stretch. Note to self: Next time, quit pedaling.

This was really long – 50 minutes – and had a number of Cat 2s and at least one 1, in addition to a slew of 3s (including Molly, a gal I befriended from PSIMet, the one who goaded me into riding the second race, which I'm glad I did, but it was grueling). I had sucked Molly's wheel for basically the entire first race and found that she was easy to follow. She caught on to the attack at the end of that 1st race before me and finished 6th, and 9th in the 2nd race, so she was probably a good one to follow.

After Molly talked me into doing the second race I ran into a BFF gal named Mary who had already signed up for the 2nd race but was thinking of not doing it. I told her to do it, that I was doing it, and she said if we got dropped we could work together. It sounded good.

The race started pretty hard, and only occasionally slowed down (mostly at corners, which didn't bother me in the slightest – I'm good at those kind of soft corners, anyway, and the chance to coast meant a chance to breathe). After around 20 minutes though I realized I'd forgotten to eat the goo I was supposed to just before the race (and had only had a granola bar and half a bottle of fuel in between the races). I kind of figured out I was going to bonk then and spent a lot of time trying to figure out if there was a way to chug any of my energy drink. There wasn't.

At the 30 minute mark they strung out pretty good, so there wasn't as much mass to draft, and at the 35 minute mark I sort of lost my oomph. I fell off the back. Mary apparently did too, so she said "You want to work together?" and I said "Sure, but I need a minute." I sucked her wheel while I drank a lot of energy drink and then said "OK. Let's go." I don't know where the oomph to pull came from (since I had lost it just a minute before) but I pulled, pretty hard even. Sadly, the gal couldn't keep up, so I waited for her a few times until she was just like "No, you gotta go. I can't keep up." So I did.

There was a gal in front of me who was at times making up ground on the peloton. I made her my target and I tucked into my drops. My plan had been to work with her by the time I caught her, but that took perhaps 2 more laps and by the time I did she had slowed to a crawl. As I approached I shouted "Great job! We're almost done! Hop on!" and tore past, slowing just enough to make sure she caught my wheel. She did and I pulled her maybe a half lap at a pretty decent clip. After we started what would have been the last lap the official stepped in and we stopped and she thanked me for helping her in.

So that's that. I did two criteriums, finished them both, and in the second race I can say I got better at figuring out how to maneuver around so that I could be on the leeward side of the peloton and standing up on my pedals to close gaps efficiently. I also noticed that the gal who came in 2nd the first race and 6th in the second rode in her drops a lot so I tried some drops cornering. I wasn't keen on it but it was OK for straight-aways. Finally, I made some friends while learning a little more about the importance of nutrition and sunscreen. 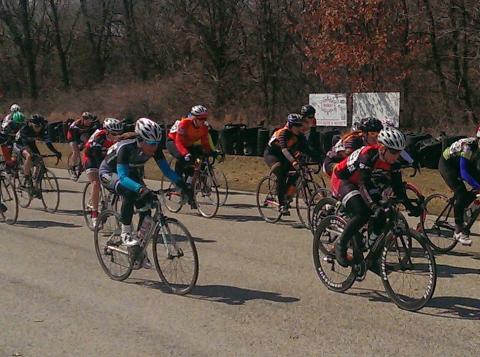