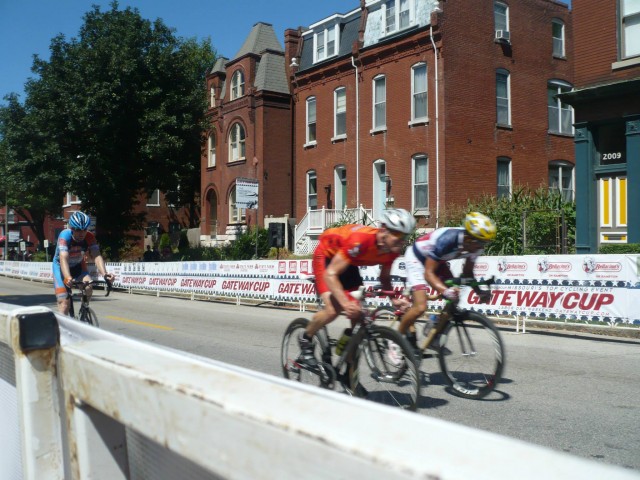 The Gateway Cup has been a fixture in St. Louis on Labor Day weekend for 22 years. I raced the cat 4/5 and the masters events on Monday in the Benton Park neighborhood. Larry Johns also did both races. The 4/5 race was marred by crashes as usual. The first major crash occurred in a narrow chicane. I bridged back, but it took some effort. The second crash occurred along the start-finish straight – a careless touch of wheels near the right barrier. I thought I could get around the left side without touching the brakes, but then another rider went down in the center of the road and rolled left. There was only 1 lap to go and I could not close another gap as the pace quickened. I pulled away from the other riders that were caught out by the crash, finishing solo in 15th. The masters race was uneventful, but fast. (Lap 2 of this race was my fastest of the day.) Larry and I were 2 of only four cat 4s in a field of about 50. I only lasted a couple laps in the pack, but riders were dropping off regularly. I had soon picked up 4 riders. We worked for several laps before it was announced that we had 1 to go. The lap counter showed 6, but we were getting pulled. One rider took a flyer. The rest of us kept working together but could not catch him. As we rounded the last corner, the rider on the front dropped off and announced that he was not racing. I was in second wheel and stayed there until about 200m to go. It seemed rather silly to sprint for 37th place, but this was “my race” and I could use the experience. I unleashed what I had. A few seconds later, Richard from Michelob Ultra started to come around, but I hit the line with about a half a wheel to spare. (I suspect he let me win because he was the first rider I picked up.) Any day of racing with the rubber side down is a good day, but I may refrain from future races with the “crash 5s.”
Scott

Friday 4/5:
Other than a crash on the second corner, the race was uneventful for most of the time.  It was very hot, as were all the races I was in.  2 laps from the end I saw an attack get free, so I attacked on my own and bridged up to them.  It was only when I looked back that I realized that my effort had pulled the entire field up to them (oops).  I was about 8th coming around the final corner, but there was a long way to the finish.  I sat in for a bit, then attacked when I saw others attacking up ahead.  I passed all but one by the finish, missing first by a few inches.  Larry finished 6th.  In hindsight I should’ve attacked a little earlier.

Friday 4:
I was on an adrenaline rush from the 4/5 race, but Soon after then start I realized that I was still tired and not as strong as I was in the 4/5 race.  I had a hard time making my way to the front, and a hard time staying near the front when I got there.  I was planning to lead Rick out, so he grabbed my wheel with about 3 or 4 to go.  I unfortunately managed to wear myself out trying to keep him near the front, and blew up with 1 or 2 to go.  Rick finished 9th, and I rolled home with the field.

Saturday 4/5:
As soon as the race started I realized I had still not recovered from Friday.  For most of the race it was all I could do not to drop.  However, on the last lap I must have found something and was able to move up, and get close enough to salvage a 5th place finish in the sprint.  I think I need to do more long rides next year so I can handle multiple races better.