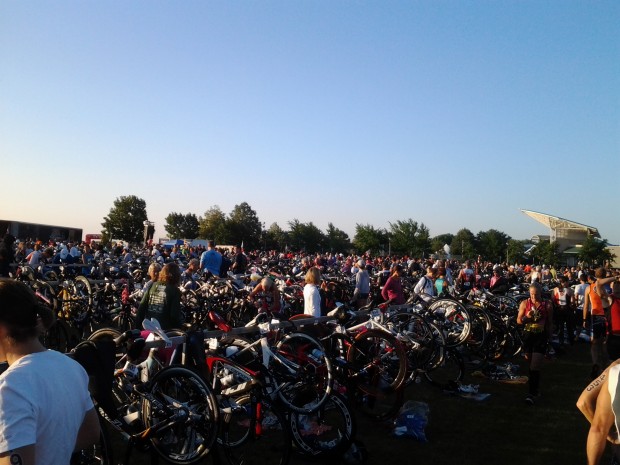 The city of Milwaukee hosted the 2013 Championships, which began with the Male 40-44 division, the largest at 270!  Scott was ready for a 7:30 am start, which became 7:45 because authorities were late clearing interstate 794. It was an in-water swim start and tensions were high with the delay. Chaos reigned when the horn finally sounded. With the size of Scott’s wave, the full-contact portion lasted about 2/3 of the swim. Conditions were fast, with wetsuits and a large wake. The bike followed the lake shore and Interstate 794, with the landmark Hoan bridge providing two long climbs. After the second turnaround, Scott was swarmed by a virtual peloton of about 10 riders as he sat up to grab a gel. The group slowed and surged over gently rolling terrain, forcing Scott into a cycle of soft pedaling, surging, and careful lane positioning to avoid a drafting penalty. The referees were taking notes and a slew of competitors posted penalties. Scott thought the interruption on the bike left him fresher for the run, and started at an aggressive pace of about 6:50/mile. By mile 4, it was apparent that he miscalculated and dropped to a 7:25 mile, but an approaching finish line is a strong motivator. He picked it up a bit at the end to cross in 2:16:48. It was good for 64th and the top 1/3.

Ron’s 55-59 group followed a little later. Although he’s the “old man” of the trio, the swim is Ron’s forte. When he took off in his 140-person age group, he encountered many more competitors swimming at his pace than usual – it’s Nationals!  For the first 500 yards he was constantly kicked, hitting arms, shoulders, and legs. He eventually found some swimming room, and easily caught up to swimmers from the prior wave. His 21 1/2 minute swim was right where he wanted to be and had been accomplished with very little energy. The transitions were smooth and fast and the bike ride was fun. Ron’s bike goal was 1:09 for the 24.7 miles (about 21.6 mph). He passed a fair number of cyclists from prior waves and got passed by about 10 from his age group. His HR of 143 and cadence in the middle 90’s were well in his comfort zone. Ron was very comfortable with his 1:10 split – close to predicted.  (His Tolono 40k PR is 1:08+ without a swim first!) Alas, a triathlon always concludes with a run. Ron started running in 2010 after 40 years of no running. His 10k tri best is 52. This one was a bit slower at 55:30. Time to add speed in training, as a sub 49 run is needed to compete in his age group. Ron finished 71 of 141 registered and 120 finishers, just about 50%ile. Ron’s next challenge is the AquaBike National Championships in mid-October. He’ll need some serious riding with the Wild Card group to properly prepare for its 56 mile bike leg.

While Scott is winding down his triathlon season, this was the first race for Martin, who earlier focused on the Boston Marathon and RAAM. Martin was happy to learn that his age group drew a late start of 10:00 am, and slept in after setting up a somewhat makeshift transition the night before: USAT allowed no boxes or bags in transition because of the Boston bombing. The race went well for Martin. At 2:19 it was 4 minutes faster than his 2008 USAT National Championship race, even though a minute was lost in T1 prying his stuff from the bike and rack. Fortunately Ron had laid Martin’s shoes on the ground after checking into transition at some horribly early hour while Martin was sleeping. Martin’s swim was sub-30 minutes (well behind Ron and Scott, but not bad for Martin). His legs felt a bit lethargic on the bike with heart rate averaging only 155 bpm, but it was good enough for a 24.1 mph average over the 24.7 mile course. The run picked it up to 165 bpm and Martin finished strong with a 6:30 mile from mile 5 to 6.  98/204 was good for top half in his age group, a nice improvement over the 2008 National Championship.

All in all, it was a successful showing in a nationally competitive field. (Full results at http://www.pigmantri.com/jmsracing/results13/usatage13d.pdf) The race weather was perfect and the Milwaukee venue was great. Lake Michigan tasted fine and left no sour stomachs after the swim. If we could combine the best of our three swim/bike/run legs, we might have a top-18 finish and an invitation to represent Team USA at the World Championships in Edmonton. But Worlds is not a relay race