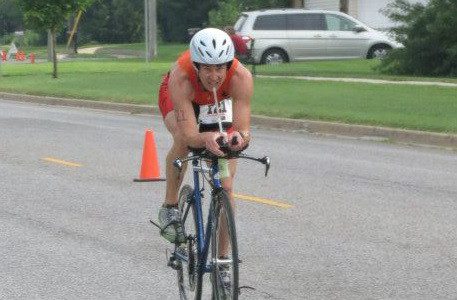 On July 13, I raced the Evergreen Lake Olympic-distance triathlon at Comlara Park, just north of Bloomington-Normal. I have done this race every year since 2008 and use it as a bellwether to mark my annual progress. Through 2012, my time has always improved year-to-year. The weather conditions were excellent this year – cool with very little wind. I had a decent, but unspectacular 1.5k swim at just over 30 minutes. My 40k bike was smooth and steady, at about 88% of my open 40k power output and 35 seconds faster than my personal course record. I faltered a little in the second half of the run, probably due to poor sleep, but averted a meltdown and only gave up 5 seconds per mile to last year’s performance. I kept the streak alive by setting a new PR of 2:18:17 and earned the second step of my age-group podium, out of 29 competitors. Overall, I was 15th among 191 age-groupers. (Results: http://itsracetime.com/Results.aspx?ID=640)

August 3 brought the locally famous Champaign Park District Mini-Tri. It is primarily a recreational, family race, though a few tough competitors line up from time to time. I consider it part of my racing heritage, as it launched my adult tri and cycling career in 2007. (I saw 2006 champion Rick Rundus in the News-Gazette and thought, “I could do that…”) It is a short, intense contest of 400 yards swimming, 6 miles biking, and 2 miles running. The bike course has three 2-mile loops, with 2 corners per mile and lots of congestion to force plenty of crit-like surges. I rode in running shoes with clip pedals to save time in transition, which led to an embarrassing fall-over crash at the end of the bike as I tried to slip out of the left pedal before I was stopped. The race had me gasping for breath almost from start to finish, though I finally found a rhythm in the final half-mile of the run. Despite being 19 seconds slower than my personal course record, I took the overall win as my usual rivals sat this one out. Sometimes it is better to be lucky than fast!  (Results: http://itsracetime.com/Results.aspx?ID=793)