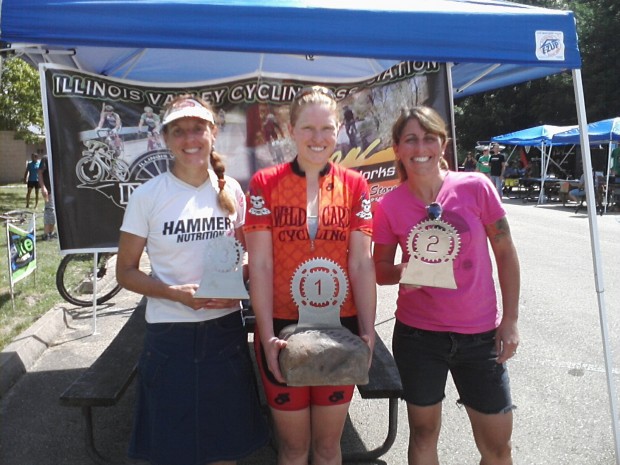 Aaron and I raced at Mattheison Mountain Madness on Sunday.  The race loop was on the shorter side, 4.8 miles, and the expert women did 4 laps.  After a short pre-loop I entered the woods near the back of pack. This course was on the technical side with several rock gardens, one of which was followed by a steep and slick climb, there were thought-provoking downhill sections, and one long climb with a steep pitch at the top that had lots of people walking.  I spent the first lap trying to maintain the gap I had on the three women behind me, the second lap I realized had the ability to climb all the hills, and the technical stuff became no problem. On either the second or third lap, Rachel Gatto caught my wheel on a rigid single speed and gave me some helpful riding tips before easily passing me, on the third and fourth laps, she and I went back and forth, making passes until we were sharing 1st and 2nd.  I made a final pass on the big hill and then kept on to the finish line before she could recover and catch me again. So that was my first cat 1 win!