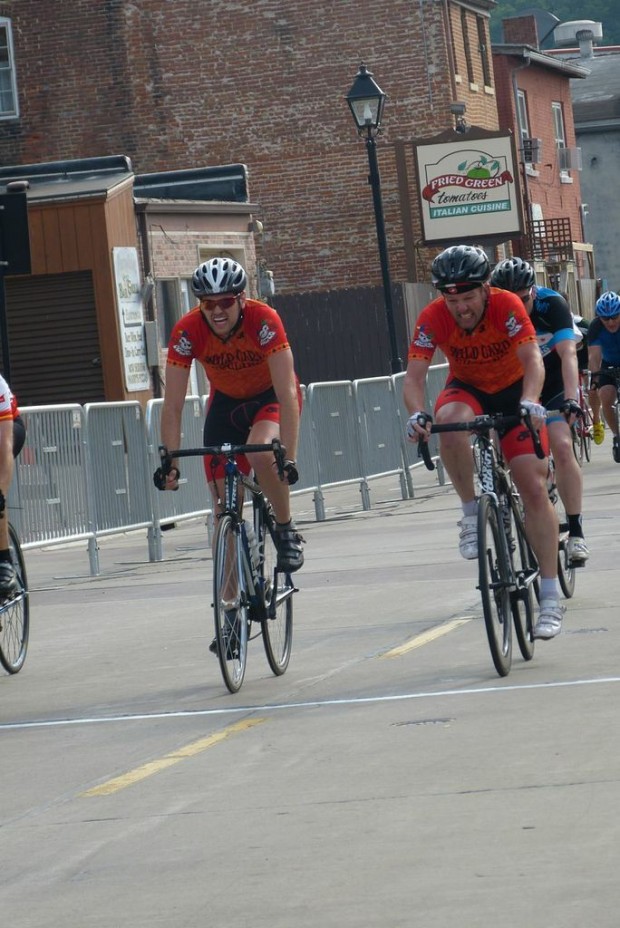 Race weekend started at 6am Saturday morning for me as we pulled away from home and started the long 4+ hour drive to Galena. The horror stories about a couple of the climbs on the road race course was on my mind the entire trip up. This was a race I was trying to peak for in my training so I was pretty pumped to get started.

When we arrived in Galena it was still a couple of hours away from the start time for the road race. Joe, Ryan, and myself used that time to do a little pre-ride on the start and the end of the course. After spending a little while warming up we settled in down by the start line and waited for our 1:20 start time.

It was finally race time, and as per usual with road races there was a neutral start to get us out of town and on to the country roads. The neutral start took us about 2 miles into the course. One weird thing was having a decent sized climb during the neutral start, right off the bat the field was getting broken up and it was hard to keep everyone together. Finally as the neutral start ended the pace picked up to a pretty good clip. This race was hammer time right from the get go, a stark contrast to what I experienced in Hillsboro. I’d attribute it to the fact that everyone is in mid-season shape right now as opposed to late March where nobody wanted to go hard unless they had to. The group stayed together for the most part through the first half of the race. It wasn’t until we hit the big climb about 14 miles in that the group was split up for good. This climb was a good one, a 20% grade at one point near the top. I broke away with about 10 other riders in the front, after the climb a few break away attempts were made, but immediately chased down (including my own). As we got within a couple miles of the finish I could tell that the race had taken a toll on a few of the guys in the pack and tried to push the pace up to see who would drop off. We wound up shaking off a couple more riders right before we got back into town. I had a lead out going into the final turn with about 200 meters to go and a few riders right on my tail. I wound up being out sprinted by the 1st place finisher, and another guy just barely squeaked in front of me by half a wheel at the finish. 3rd place would be where I would end up, which was a little bittersweet after being out front with 200 meters to go.